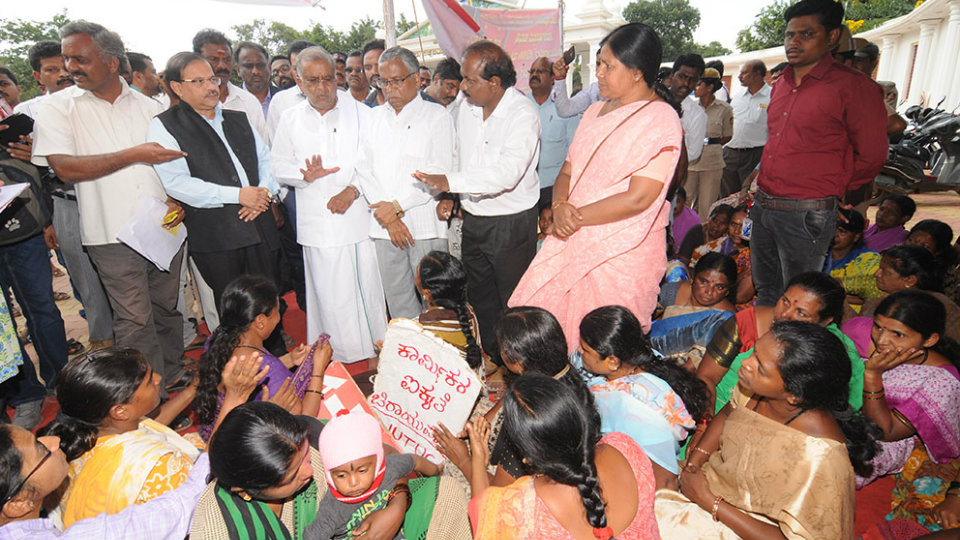 Mysuru:  The indefinite stir launched by women Civic workers of University of Mysore (UoM), citing issues such as wage disparity and outsourcing of cleaning work to third parties, finally came to an end with District in-Charge Minister G.T. Devegowda visiting them on Monday.

The women Civic workers were on an indefinite stir in front of Kuvempu Statue at Manasagangothri for the past seven days.

The Minister, who patiently heard the grievances of the Civic workers, directed UoM VC (in-charge) Prof. T.K. Umesh to cancel the new tender, which the Varsity had called to hire new contract workers.

Besides highlighting the imminent danger of unemployment that the new tender posed, the protesting women Civic workers sought regularisation of their services and statutory benefits such as ESI and Provident Fund (PF).

G.T. Devegowda also promised to address other issues that the workers had raised including the demand for pay on par with permanent employees.

The Minister also assured that he will address the issues after the Dasara celebrations. Taking the case of a woman Civic worker, who was forced to return to work soon after giving birth, into cognisance, Devegowda directed the University administration to provide maternity leave for Civic workers and also asked the authorities to extend healthcare benefits to the workers.