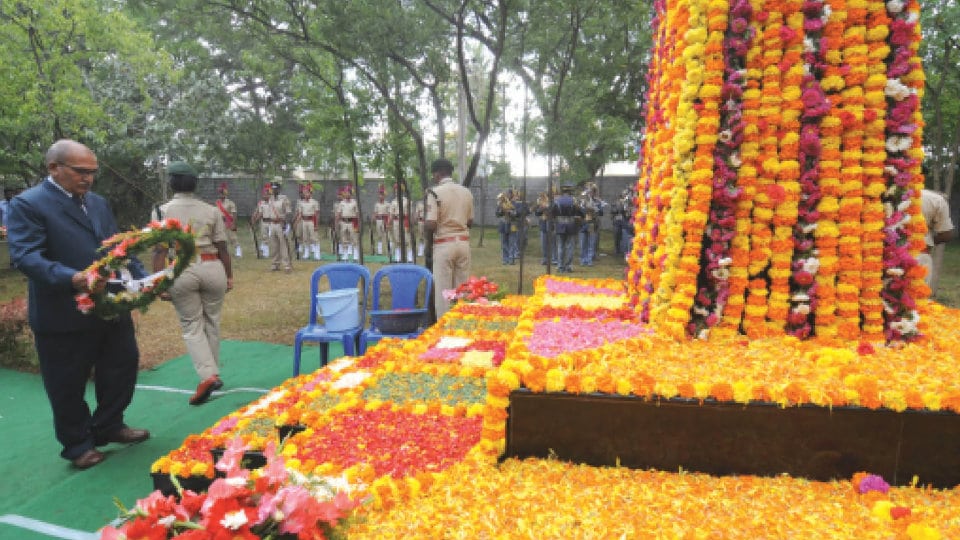 Mysuru:  With the staff standing with theirs heads bowed down at the four corners of the Martyr’s Memorial at Late Venkataswamy Park, opposite Aranya Bhavan and firing three shots in the air, to show respect to Martyrs, tributes were paid to Forest Department personnel who had laid down their lives in the line of duty, to observe National Forest Martyrs’ Day this morning.

Additional Principal Chief Conservator of Forests (APCCF) Jagath Ram, who was chief guest, recalled the sacrifices made by the Forest staff in safeguarding the natural wealth and said that Forest Martyrs’ Day is being observed to remember and give respects to all those who had laid down their lives while on duty. He said that it was one’s duty to remember them daily and not rrestrict itto occasions like Martyrs’ Day, he added.

Remembering late S. Manikandan, Conservator of Forests and Director of Rajiv Gandhi National Park, Hunsur, who was killed by an elephant in March this year, Jagath Ram said that the late officer should be remembered for his commitment and for his yeomen service to the wildlife and called upon the forest staff to follow his steps in conserving wildlife.

Prior to this, the Forest Department personnel fired three rounds of bullets in the air as a mark of respect for martyrs. The guests also paid floral tributes to the Martyrs’ Memorial.

Why Forest Martyrs’ Day is observed?

On Mar.11, 1730, Maharaja Abhay Singh of Jodhpur, who was building a new Palace, had ordered his soldiers to chop Kerji trees grown in Kejarli province, which was opposed by Bishlohi community which angered the Maharaja who got 363 men, women and children killed. In a bid to remember the sacrifices made by the Bishlohi community and to pay respects to those who were killed while protecting the trees from being chopped, the Government announced to observe Forest Martyrs’ Day on Sept.11 throughout the country.