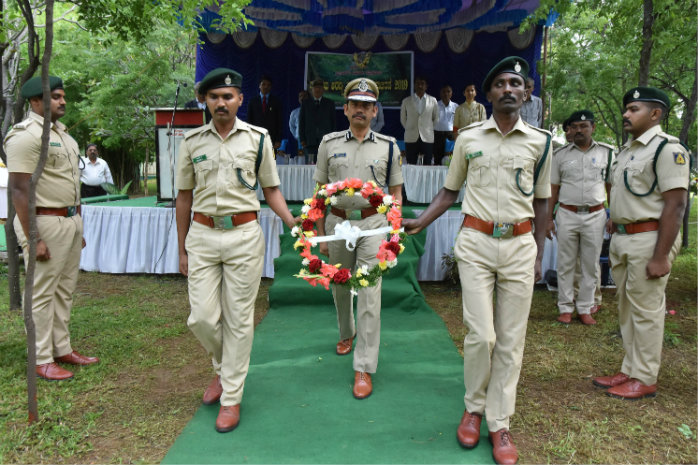 Mysuru:   Forest officials of Mysuru District paid tributes to martyrs who had laid down their lives in the line of duty on the occasion of National Forest Martyrs’ Day observed at Late Venkataswamy Park, opposite Aranya Bhavan at Ashokapuram, here this morning.

The officials fired three rounds in the air and observed silence before placing the wreaths to the memorial. Speaking on the occasion, IGP (Southern Range) Vipul Kumar remembered the contributions of forest officials and guards especially during the Veerappan operation many including the then DCF Srinivas had laid down their lives in line of duty.

Stating that the National Forest Martyrs’ Day was observed in memory of 363 people belonging to Bishlohi community who were killed by Maharaja Abhay Singh for protesting against the felling of Kerji trees, Vipul Kumar said that the tribal communities played a vital role in protecting the forest from being exploited by few greedy people.

“The increase in man-animal conflict has resulted in deaths of many police personnel and forest officials losing their lives. Today, man has become so greedy that he has been acquiring the forest land to fulfil his greed for money and land. Though environment conservation and wildlife conservation are part of our syllabus which has been restricted only to books, there is need to create awareness among the younger generation to avoid man-animal conflicts in the future,” he added.

Earlier, the forest officials offered floral tributes to the portraits of late DCF Srinivas, who was killed in Veerappan operation and late S. Manikandan, Conservator of Forests and Director of Rajiv Gandhi National Park, Hunsur, who was killed by an elephant. Family members of the forest department staff also offered floral tributes to the memorial at the park.

Why Forest Martyrs’ Day is observed?

On Mar.11, 1730, Maharaja Abhay Singh of Jodhpur, who was building a new Palace, had ordered his soldiers to chop Kerji trees grown in Kejarli province, which was opposed by Bishlohi community which angered the Maharaja who got 363 men, women and children killed. In a bid to remember the sacrifices made by the Bishlohi community and pay respects to those who were killed while protecting the trees from being chopped, the Government announced to observe Forest Martyrs’ Day on Sept.11 throughout the country.