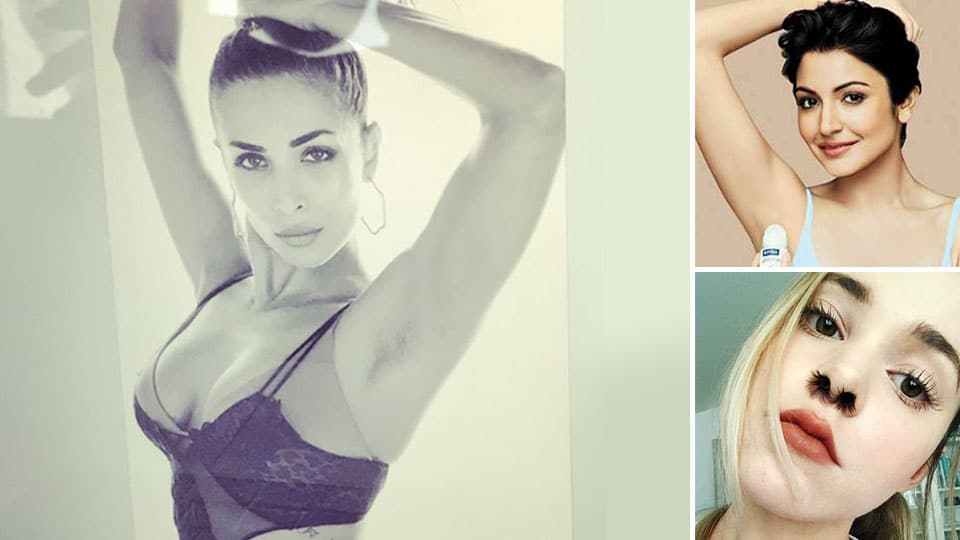 Two days ago, while the Nation was waiting with bated breath to see what the new Government’s Cabinet would look like, many others were looking elsewhere. And what they saw made them lose their wits while others loved it. So what did they see?

Yes, Malaika Arora’s axillary hair made it to the first page of top news websites of this Nation! NDTV, one of the most visited websites, had this headline: “Malaika Arora’s armpit is burning up Instagram.”

Well, may be after months of election news overload, Malaika’s “pit bush” may have been an exciting distraction for many. Photograph of her axillary hair-patch got well over 4 lakh likes and over 5,000 comments. I guess this proves what Congress has been saying all along —  that there are a lot of jobless people out there ! Either that or quite a few of Malaika’s followers have Maschalagnia — a fetish where people find armpits arousing!

What got my attention though, other than the fact that national media thought this was newsworthy were the comments. As expected, many comments were rude, crass and judgemental.

But most women asked, “Why is it that when men have armpit hair no one finds it disgusting but when women sport one, it’s repulsive?” They then made a generalised statement, “Hypocrisy of men and their patriarchal attitude.”

Truth is when someone sports an armpit full of bush, be it a man or a woman, most people find it an eyesore. It has nothing to do with man or woman. It’s just a choice. Just like how some women like men with thick facial hair while others find it unhygienic. Rude comments about women’s armpit hair should be ignored and there is no need to make a blanket statement about men.

It seems today in the name of feminism even the mundane choices women make is blamed on men. The phrase “patriarchal mindset” is liberally thrown around to brand all men as Misogynists; men can also call such women as Misandrists.

Two years ago armpit hair became a sign of “women’s empowerment” (!) when there are way more bigger issues, ranging from equal pay to sexual harassment. Follicular display is a matter of choice, it is individualistic and there is no need to give it a place in the grand canvas  of  “feminism” or                            “female empowerment.”

In fact, men did not set the standards for what an attractive woman is. It usually is women and women’s magazines who set these standards. Since we mentioned armpit hair, remember just two years ago the cosmetic company Nivea started a “Go Sleeveless” campaign? Yes, they made fair and lovely for the armpits, it was called Nivea Whitening Deodorant.

And Anushka Sharma, a modern feminist, said “Women today are quite conscious of their dark underarms…and if you want to wear a sleeveless outfit where your underarms will show, you should have the ability to wear it with confidence. That confidence comes from usage of Nivea Whitening Deodorant.” So an educated woman is telling other women that white armpits give you confidence.

Forget pleasing personality, wit, conversational ability or charm, next time just lift your arm and you might just light up the room! Why didn’t any of the feminists question Anushka?

As for armpit hair, sure most men find it unattractive just like how most women find loooooong Lalu Prasad like ear hair unattractive on a man. It is understandable.

Just imagine fighting wiry strands of hair while you whisper something romantic into your man’s ear? You just might end up spitting out some hair after you are done whispering! If you said “yuck” to that imagery, does that make you a misandrist with a matriarchal mindset? NO, it doesn’t. It’s just a matter of personal “taste”…no pun intended, not everyone spits after a romantic whisper into a hairy ear.

Well, in fact now men too are judged by a new beauty and grooming standard — From 6 pack abs to waxed chest. From applying Fair & Handsome to moustache and beard wax. Women did not do this, men’s magazines and cosmetic industries did.

Yes, narrow beauty paradigms are born out of a double assault — Capitalism and Social Media. Beauty industry needs to sell fitness products,                  cosmetics and clothes to make money. And Instagram and Facebook gets you addicted to social validation. So it is social validation Vs self-confidence. Not man Vs woman. So stop blaming men for even the follicular choice a woman makes, especially in this day and age.

By the way, as if growing out your armpit hair was not trendy enough, people are getting nostril hair extensions! Yes, it is the new thing. There are people walking around with shrubs sticking out of their nostrils.  What next? Let our genital blanket grow wild and let it peep out of our zippers?

For now, let’s just leave Malaika and her fertile armpits alone. But more importantly, stop trivialising feminism and women’s empowerment movements by including “grow armpit hair” as a woman’s cause.

A newly-married couple was all set for their first night. They both were from conservative backgrounds and so were not aware of bedroom dynamics.

So as the newly-weds lay in bed, they did not know what to do.

The husband called his father and asked, “Father what am I supposed to do?” The father replied, “Son just undress and things will happen.”

A few minutes later, he called his father again and said, “Father we have undressed and nothing has happened.” The father said, “Son just snuggle and things will start happening after that.”

A few minutes later he called his father once again and said, “Father we snuggled but nothing is happening.”

The frustrated father said, “Son, now listen carefully, take the biggest thing you have and put it in her hairiest spot.”

A few minutes later, he once more called his father and yelled in frustration, “Father I’ve got my nose in her armpit, now what?!”