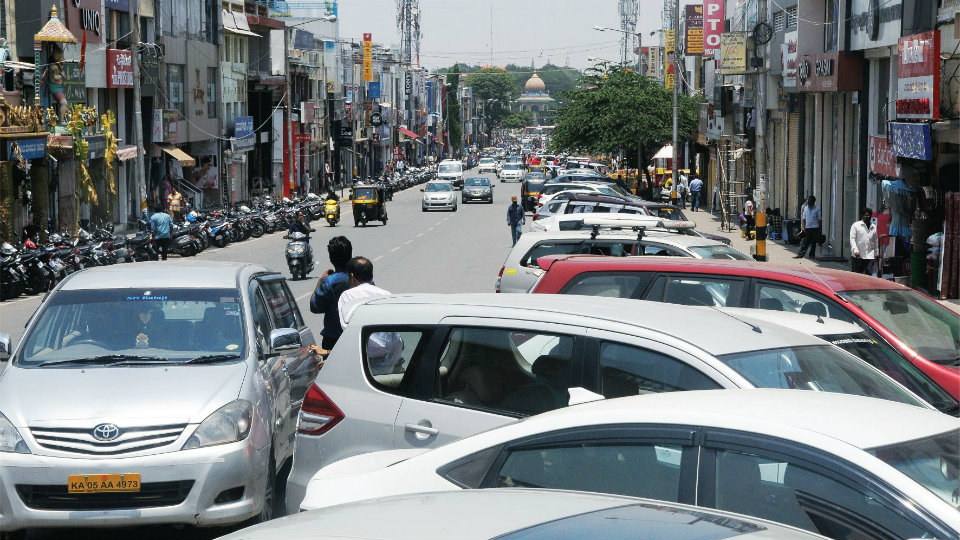 Mysuru: After several failed attempts to regulate the premium parking space on D. Devaraj Urs Road and Sayyaji Rao Road, the Mysuru City Corporation (MCC) is all set to ban parking on the two roads once the multi-level parking system is ready  at the Town Hall. And till the Town Hall parking facility is ready, pay-and-park system will be introduced on both roads to ease parking woes.

Speaking to Star of Mysore this morning, MCC Commissioner G. Jagadeesha has said that the Corporation aimed at completing multi-level parking system before Dasara this year.

“Once it is ready, we will ban parking on Devaraj Urs Road and Sayyaji Rao Road. Visitors to these roads will have to park their vehicles at the Town Hall and then come on these roads,” he said.

The MCC Commissioner has, however, clarified that there will be vehicle movement on these roads. “It will only be no-parking zones. We want to ensure that the roads are not clogged as they are now with motorists and pedestrians jostling for space. Till the multi-level parking system is ready, we want to implement the pay-and-park system,” he said.

Jagadeesha said that certain shop owners on both the roads park their own vehicles depriving the facility to shoppers. “We have seen that shop owners bring their cars (sometimes owners of one shop bring two to three cars) and park from morning till evening. This has led to a lot of inconvenience to shoppers, tourists and other visitors. We want to prevent this,” he said.

“We have received a lot of complaints from the public and shoppers about the lack of parking space and the constant traffic jams on both the roads. No Parking Zones will solve these problems, he added. 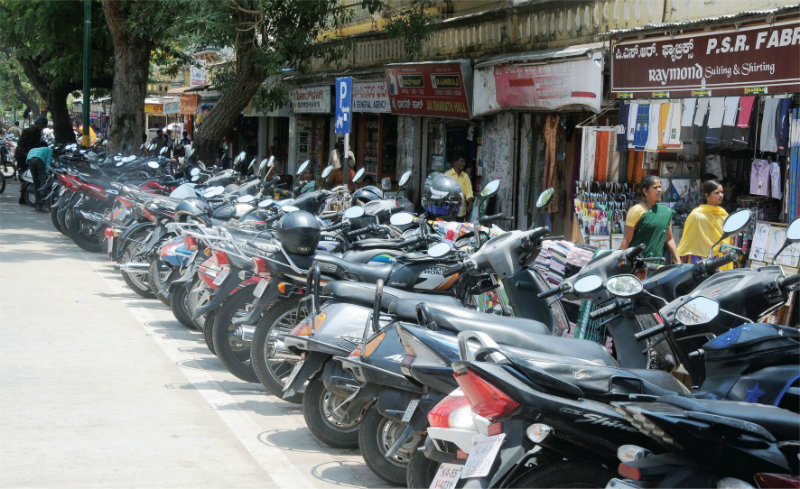 After a series of discussion within the MCC and with District In-charge Minister Dr. H.C. Mahadevappa, the MCC had recently floated tenders. “As the tender norms were stringent, there was less response. We have discussed this with the Minister and have relaxed a couple of norms. We will again call for tender next week,” he said and added that the parking charges have not yet been fixed.

The multi-level parking system at the Town Hall and a separate parking facility for two-wheelers can accommodate 450 to 500 cars and over 1,000 two-wheelers. “The works have not yet been completed as the contractor has defaulted. We have blacklisted the contractor and fresh tender will be called to complete the works,” Jagadeesha added.

It may be recalled here that District In-charge Minister Dr. H.C. Mahadevappa had recently asked the MCC and MUDA authorities to find suitable places to construct multi-level parking plazas near the Devaraj Urs Road and the Sayyaji Rao Road and restrict the movement of vehicles on them.

“In many countries, parking of vehicles was not allowed on busy roads. People will have to walk for one or two kilometres to park their vehicles in the designated lot. This has prevented accidents and facilitated hassle-free shopping,” he had said.