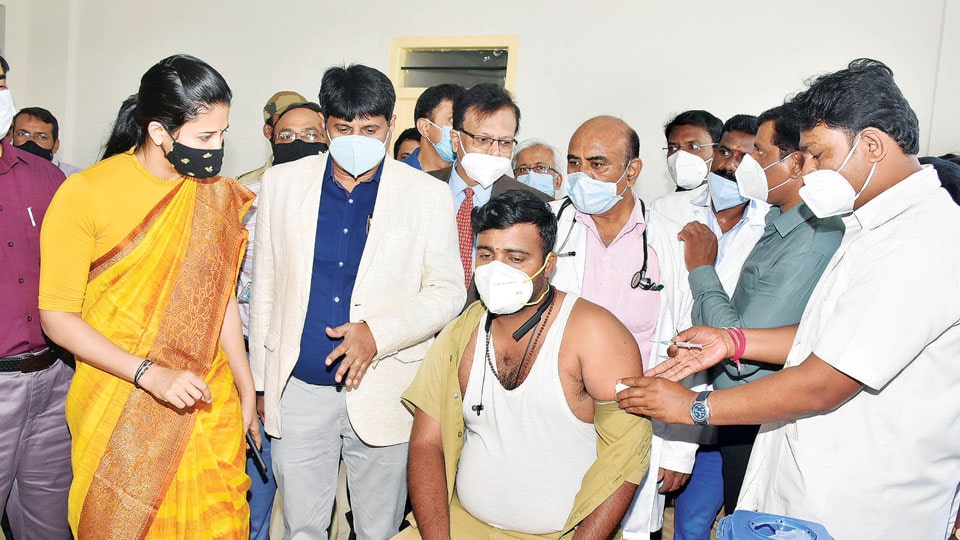 Mysore/Mysuru: U. Sandesh, an ambulance driver and Jayalakshmi, a hospital staff, became the first recipients of Covishield vaccine in Mysuru city at the Trauma Care Centre on KRS Road and JSS Hospital respectively on the first day of vaccination drive launched country-wide  this morning.

While Sandesh works as an ambulance driver at K.R. Hospital, Jayalakshmi works at JSS Hospital. Trauma Centre in PKTB premises and JSS Hospitals were only two session sites identified by the Government of India in city for administering vaccine in the first round. In district, vaccination has started in six Taluk Hospitals and one Health and Wellness Centre.

Both recipients, after 30 minutes of mandatory waiting for any side effects, told the waiting media persons that they were feeling normal with no side effects. “We are happy to get inoculated first in the city. The vaccine is safe and the citizens can take up without scare”.

Sandesh said he came to know about being selected for vaccination in first round and felt happy. As ambulance driver, he had shifted dead bodies of COVID-19 victims to burial grounds and crematoriums. “I was happy after two vaccines are available now to save lives of millions”.

In fact, Jayalakshmi was fourth in the list to get vaccinated at JSS Hospital. However, the first beneficiary, Indiramma, a house keeper, could not take it due to ‘technical glitches’ in CoWIN App, so as two others, Neela and Shilpa.

A festive atmosphere prevailed at Trauma Centre on KRS Road with decoration of the reception area with colourful balloons. A host of senior doctors, Health Department officials and the beneficiaries watched the live telecast of Prime Minister Narendra Modi virtual launching of the world’s biggest vaccination drive. Inoculation started only after the PM’s speech ended.

Dedicated rooms were established for checking documents of beneficiaries, vaccination, and observation.

Speaking on the occasion, DC Rohini Sindhuri said that vaccination was going on smoothly at six Taluk Hospitals and one Health and Wellness Centre in the district. The Government of India has allotted 20,500 Covishield vaccine vials as against the demand of 36,000 vials. After the first round, frontline warriors like Police, Home Guards, Safai Karmacharis and Revenue Department employees would receive the next short and their names are being finalised. The citizens may get vaccine in third or fourth round. “So far, there is no report of side effects on any beneficiary from nine session sites in the district,” she noted.

The vaccination drive was held smoothly at JSS Hospital, where the first three trials of Covishield were held a few months ago, thanks to the efforts of Suttur Seer Sri Shivarathri Deshikendra Swamiji and JSS Academy of Higher Education and Research (JSS AHER) Pro-Chancellor Dr. B. Suresh.

The session site was established on the second floor of General Medicine Ward (Female) in the new building. The beneficiaries were standing at a safe distance and wearing face mask.

A medical team was kept ready to attend to the vaccine beneficiaries if at all any side effects were reported. As many as 100 healthcare workers were inoculated today.

3 COMMENTS ON THIS POST To “Vaccination Drive begins in city”