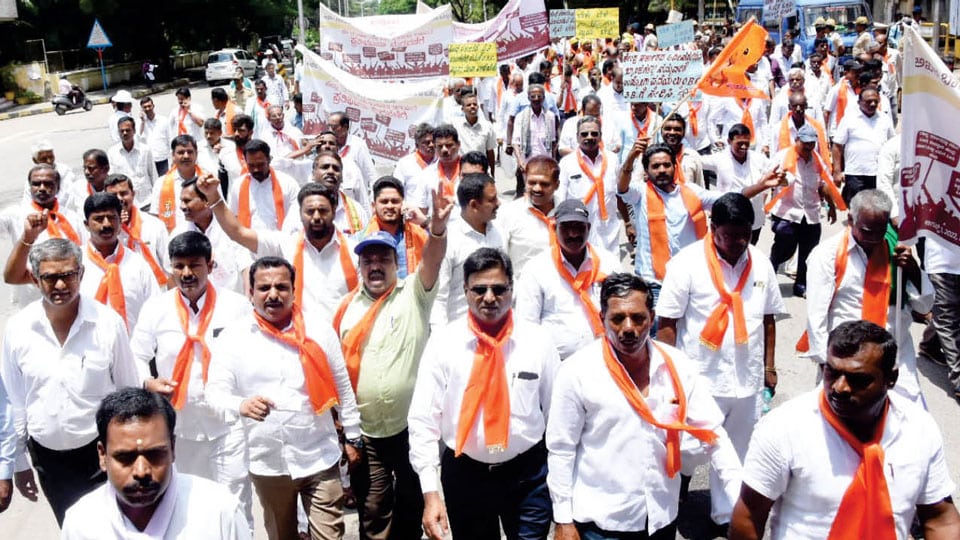 Mysore/Mysuru: Seeking inclusion of all sub-sects of their community in the Central OBC (Other Backward Classes) list, hundreds of Veerashaiva-Lingayat community members, under the joint banner of Akhila Bharata Veerashaiva-Lingayat Mahasabha and Basava Balagagala Okkoota, Mysuru, took out a massive rally in the city this morning.

The community members who converged on Basaveshwara Statue Circle near JSS Mahavidyapeetha, staged a demonstration for some time, before taking out a rally to the Deputy Commissioner’s (DC) office.

The rally passed through Chamaraja Double Road, Ramaswamy Circle, JLB Road and Vinoba Road before reaching the DC’s office, where a memorandum was submitted.

Maintaining that sub-sects of Veerashaiva-Lingayat community as a whole, have remained educationally, economically and socially backward for decades, the protesters regretted that the Union Govt. has failed to include the community in the Central list of OBC, despite several representations in this regard.

Contending that the O. Chinnappa Reddy Commission had clearly recommended that the Veerashaiva-Lingayat community be included in the OBC list, they said that though the community has been listed under OBC in Karnataka, it is unfortunate that the community has failed to find mention in the Central OBC list even after decades.

Asserting  that the community has been deprived of Civil Service and other key Central Government jobs and admissions in top and prestigious Educational Institutions because the community sub-sects do not find place in the Central OBC list, they urged the State and Union Governments to consider their demand at the earliest and thus render justice to the community.