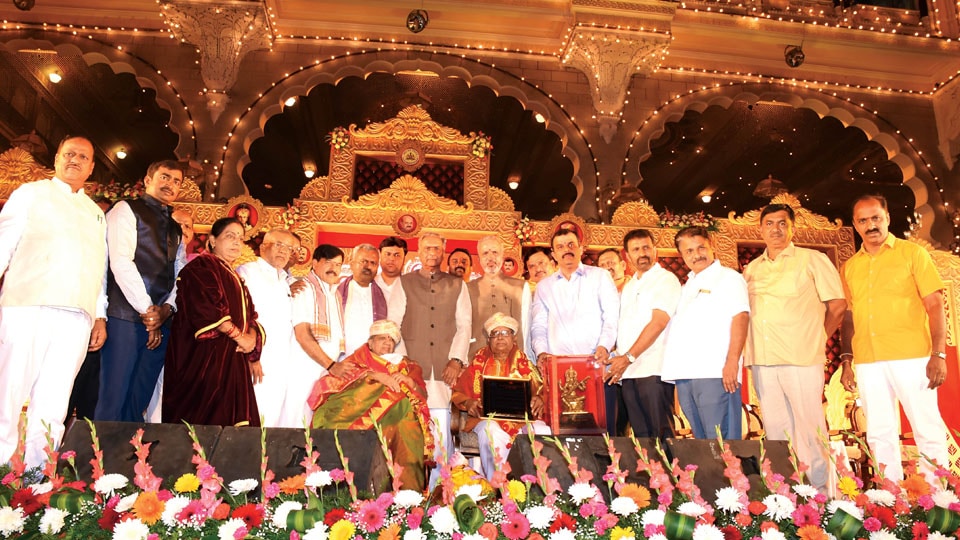 Speaking after receiving the award, he said that though he lived in Bengaluru, Mysuru was his favourite city and has great respect for Mysuru, which is considered as a cultural capital.

Pointing out that he is a native of Hassan, Vidwan Anand recalled that Jayachamaraja Wadiyar was very much impressed by his performance at a musical concert. Noting that JC Wadiyar had great interest in music, he said that the erstwhile Mysore ruler himself was a musician  and a scholar.

Stating that he got an opportunity to be part of a concert of music icon Piteelu Chowdaiah at a young age of just 11  years, Vidwan Anand recalled that he was virtuous to be part of Chowdaiah’s troupe for years.

Maintaining that he has given many musical concerts in Mysuru between 1975-1995, he credits the award to the blessings of Goddess Chamundeshwari.

Dedicating the award to his Gurus and parents, Vidwan Anand said he was grateful to the Government and all others for conferring the award on him.

Vid. Anand and his wife were honoured on the occasion. Incidentally, Thursday was also the 51st wedding anniversary of the couple.

Speaking on the occasion, Kageri said that Mysuru is a model to the entire country not only for its cultural richness, but also in  respect of several other fronts.

Recalling the contribution of erstwhile Mysuru ruler Nalwadi Krishnaraja Wadiyar for the growth of the State, he said that the democratic set up during  Nalwadi’s tenure is still considered as a model administration.

Pointing out that it is happy to note that the Government has made efforts to create a ‘cultural wave’ of sorts during Dasara, Kageri underlined that the participation  of the people too is crucial for  ensuring that this ‘wave’ flourishes in the future too. Noting that though we may get jobs through education, it is this sort of programme that gives us cultural knowledge, he added.

Council Chairman Basavaraj  Horatti, in his address, said that the other name for culture is Mysuru and he was blessed to be part of this Dasara event.

Pointing out that the Legislative Council in Karnataka has completed 114 years of existence, Horatti said that he has written a letter to Prime Minister Modi urging him to name an auditorium at the new Parliament building being built in New Delhi  as ‘Anubhava Mantapa’ as an honour to 12th century social reformers Basavanna, Allamaprabhu and Akkamahadevi.

Minister V. Sunil Kumar, who also spoke, said it was his good fortune that he got an opportunity to inaugurate Dasara illumination as Energy Minister and to inaugurate the Dasara cultural programmes as Kannada and Culture Minister.

As part of ‘Azadi Ka Amrit Mahotsav’ marking the 75th anniversary of the country’s independence, the Kannada and Culture Department has planned to organise a variety of cultural programmes across the State in January next, he added.

K.R. MLA S.A. Ramdas, who presided, said that Dasara cultural programme is an emotional one for the entire population of the State. Thanking the Kannada and Culture Minister for conferring ‘State Sangeetha Vidwan’ award on Anand, he said he was happy to note that the Vidwan was conferred the award on the same day of  the awardee’s  51st  wedding anniversary.