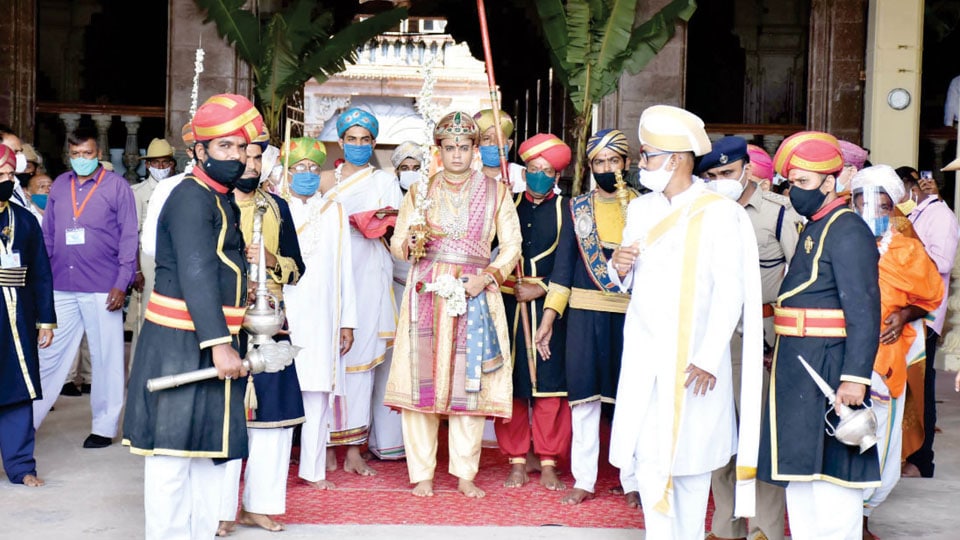 Mysore/Mysuru: Although Dasara was a low-key affair this year in the wake of the deadly COVID-19 pandemic, the conduct of all important traditional rituals such as Vijaya Yatre and Shami Puja (Banni tree worship) ahead of the procession, added gaiety to the celebrations inside the Palace premises on Vijayadashami yesterday.

Wearing the costume of Maharajas, titular head of the royal family Yaduveer Krishnadatta Chamaraja Wadiyar performed Vijaya Yatre and Shami Puja, with Pattada Katti placed on the Addapallakki in front of Aane Bagilu of the Palace.

Soon as the procession reached Bhuvaneshwari Temple in the Palace premises, Yaduveer marched towards Banni tree and performed the customary rituals under the guidance of the Palace Priests.

Later he distributed flowers that were used for puja, among the gathering  and offered ‘kanike’ to the Priests. Thereafter, he returned to the Palace marching along with Vijaya Yatre, following which he offered prayers to Goddess Chamundeshwari at Kannadi Thotti, thus  marking the completion of all the associated rituals.

Even as the Vijaya Yatre was nearing completion, the pair of cattle which drove the Addapallakki, got scared and tried to ran amok, which caused tension among the gathering for a few moments.