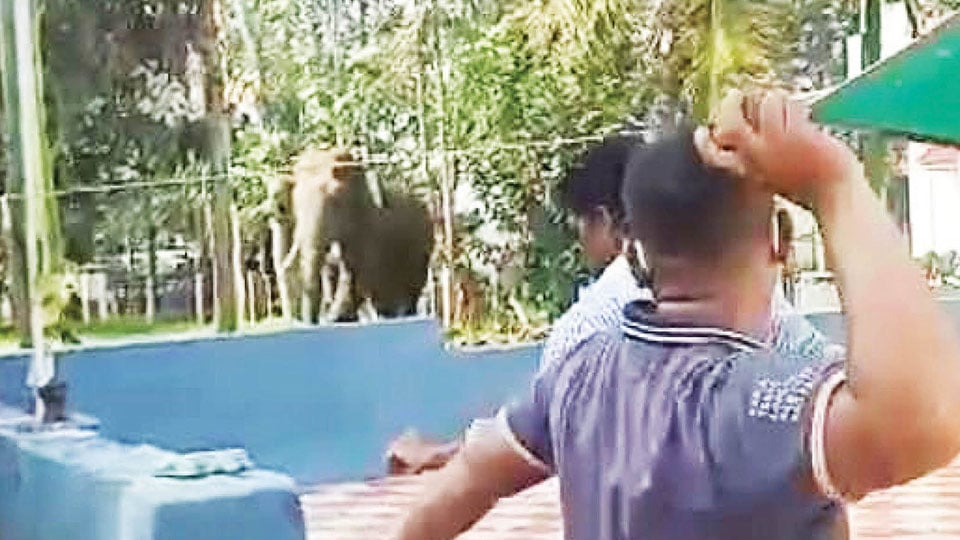 Hunsur: Fed up by the constant inaction by the Forest Department despite many appeals and damages to crops, the residents of Tibetan Colony at Hunsur drove away a marauding wild elephant that had entered their habitat. Using shouting crowds and stones as weapons, the villagers chased the elephant from the plantations.

A wild tusker entered into the Tibetan settlement from the Nagarahole National Park from Sollepura area under Veeranahosahalli Range and has been camping deep inside banana and jowar plantations since the last two days.

The tusker had already destroyed most of the plantation and went on a rampage as it saw people around. Villagers alerted the Forest Department but none of the officers and staff bothered to visit the area while men and women stayed indoors fearing an attack. Many did not even go to markets and schools out of fear.

Today morning, the elephant was spotted eating crops near a wooded area and villagers gathered to drive it back to the jungle. They formed groups and began shouting and pelting stones at the tusker. The pachyderm was driven to the forest through Hosa Penjalli area of the Tibetan camp.

But soon after, planting itself amidst a jowar plantation, the tusker was feeding on the standing crop and as the villagers entered the area, it charged at them and entered the camp area. Villagers shouted and threw stones at the tusker and it then entered a shrubby area.

As soon as the Forest Department got to know about the elephant chase operation by the villagers, they rushed to the spot and took over the task of driving the tusker back into the woods.

Farmers said that they are suffering from huge losses due to elephants destroying their crops every other day. They alleged that the Forest Department has failed to drive the elephants that have stayed put at many places.

READ ALSO  All efforts on to trap elusive tiger

Mainly these elephants come from the Veeranahosahalli Range, fringes of forests from Mahadeshwara Colony and Kunteri where Hunsur borders with H.D. Kote. The villagers have urged the Forest Department to post guards at these places to ward off elephant entry.

They have urged Hunsur MLA H.P. Manjunath to take steps to control the menace and provide adequate compensation to farmers who have lost their crops.