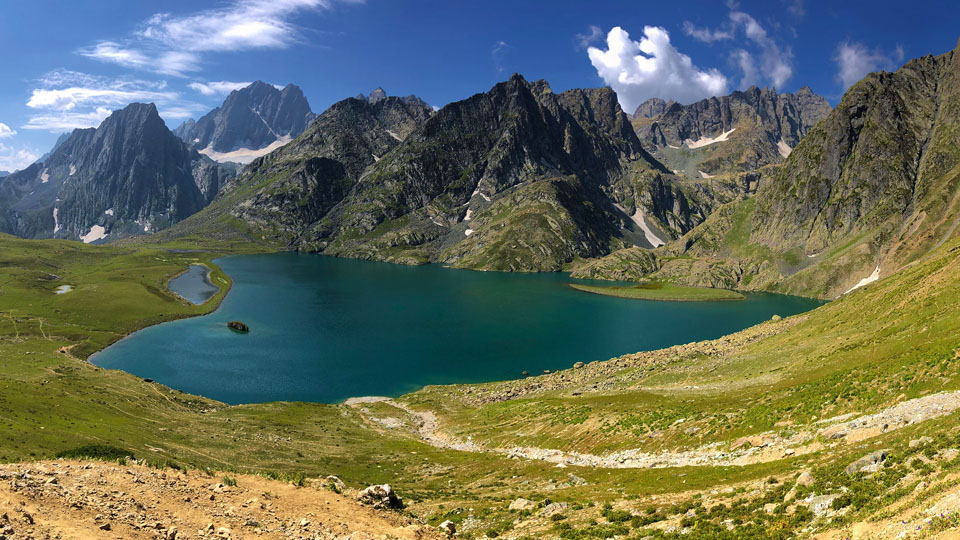 Thanks to the shift in media attention from COVID to Taliban, many trekkers backed out apprehending an attack in Kashmir. But a small group of people from Mysuru and Bengaluru made up their mind and trekked to the Great Lakes of Kashmir from Aug. 24 to 31 and the expedition was organised by Tiger Adventure Foundation, Mysuru.

Among the trekkers were M. Purushotham, a contractor from Mysuru who dismissed the Taliban threat in Kashmir as unfounded. “I was here in 1988 when the situation was calm. But now though the situation in Kashmir was unsettling, we 12 members from Karnataka decided to go and we faced challenges with grit and determination,” said Jagadamba of Bengaluru.

“It was a wonderful season to see flowering in the wilderness, boulders and you could hear the gurgling sound of streams passing underneath though they were not visible. We could see hail storms, rain passing clouds, fog, glaciers, lakes and what not, and what an individual can dream about Kashmir was all there to experience,” said Pranavi, a student of 11th standard from Bengaluru.

Twelve members drawn from different professions from Mysuru and Bengaluru congregated for this expedition. The team arrived at Sonamarg in the evening where a camp was set up by the side of Sindhu River.

The next day, the team was excited to trek to Nichnai but started at 11 am as the permission to trek came late. As the trekkers traversed uphill, they saw olive green uniformed personnel checking permissions including trekkers, guide and the mule person too. As they trekked uphill they again met the uniformed men who wished a safe expedition and assured that safety is ensured by the presence of the Army.

It was an arduous trek and took more than eight hours to cover a distance of 11.2 kms to reach Nichnai. “It was a challenging day that sprained my leg,” said Dr. S. Kalavathi, a gynaecologist from Mysuru. “The next day, trekkers encouraged me and made sure that I sail for the day to reach the destination of 12 kms to Vishansar Lake via Nichnai Pass,” she added.

“As we reached Vishansar Lake, we found beautiful meadows en route and it was a feast for cameras. As some of them suggested we stay back for acclimatisation, we didn’t opt to rest and climbed uphill to Gadsar Pass via Vishansar and Kishansar Lake. Both the lakes looked small, as we climbed uphill to Gadsar Pass, we could see beautiful views of the Lakes,” said Dr. Hemalatha of Bengaluru.

According to Harish and P.B. Sunil of Mysuru, as they reached Gadsar meadow and camped there overnight, they saw a broken glacier to be crossed and also witnessed falling stones from the top and caved-in mud. “We were extra careful and negotiated narrow paths with utmost care,” they noted.

After traversing dangerous paths, the trekkers walked about 10 kms to Satsar Lake amidst hovering clouds. Trekkers walked on the boulders, crossed several streams and glaciers and it rained heavily in Satsar.

“Visibility was almost like zero and we waited for clear weather and then proceeded towards Gangabal via Zaj Pass. But trekking amidst zero visibility was a challenge and we had to depend on voice modulation to avoid getting lost,” narrated Mahesh Shanthilal Chopda of Bengaluru.

Trekking in adverse weather on slippy boulders was itself a challenge. “But after climbing the Zaj Pass, the descent was also equally challenging as it had rained and we walked down the lane for the next 5 kms to reach Gangabal. The view of the peaks like Harmukh was astonishing and the twin lakes at Gangabal were a feast to the eyes,” said Jagadamba of Bengaluru. In the village, trekkers could see the ruins of a Temple which was on the path of vandalism as there exist no Hindu pandits in that village to upkeep the Temple complex.