Home » Columns » Abracadabra By K. B. Ganapathy » Whatever happened to bravehearts of Kashmir? Ask Vikram Sampath! 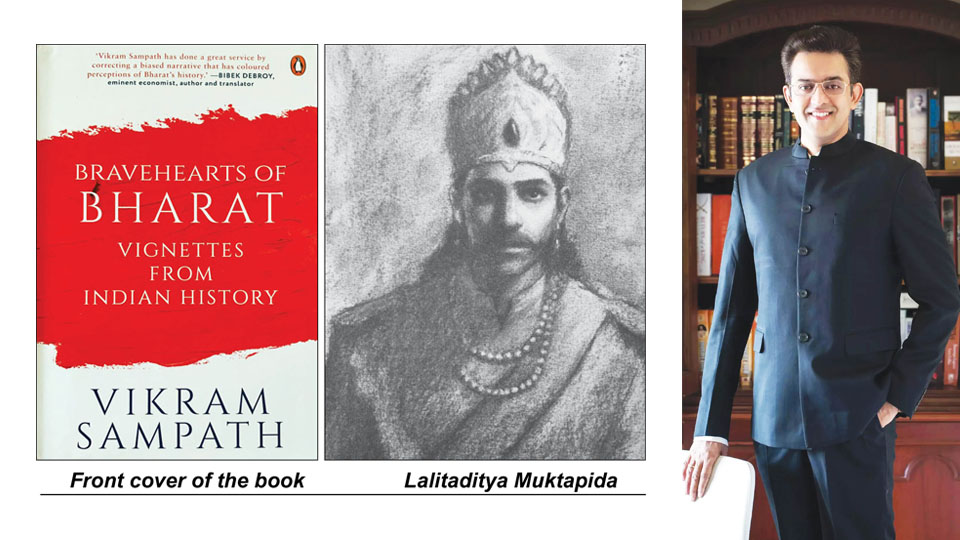 Whatever happened to bravehearts of Kashmir? Ask Vikram Sampath!

Last month an interesting book about forgotten India — Hindustan, Bharat — was released in Bengaluru titled “Bravehearts of Bharat – Vignettes from Indian History”  by the young historian Vikram Sampath. A prolific writer on subjects history, he has written a biography on Veer Savarkar in two tomes. He has also written a very good book on Mysore Wadiyar’s titled “Splendours of Royal Mysore”, a must read for Kannadigas, specially Mysureans.

When this book “Bravehearts of Bharat” landed on my desk, courtesy Shubha Urs of Mysuru Book Clubs, I was delighted and immediately got down to reading it.

The book opens a window to the stories of select men and women, who valiantly fought against invaders to defend their territories, kingdoms, protect their rights, faith and freedom. During our student days, for all these 75 years after independence we Indians were denied access to the valour and rule of these bravehearts who lived and died in this Bharat, the Indian peninsula.

Vikram Sampath has  greatly fulfilled this academic and historical need — he has thrown light on this black-hole of Indian history so that the present and future generation of our country may be enlightened about our noble and valiant kings and queens who had ruled us as per Sanatana Dharma. Thank you Vikram Sampath. Like Jesus raising the dead Lazarus back to life, you have raised to life and library our forgotten bravehearts who were entombed or cremated for centuries.

In the prologue to the book, Vikram Sampath eloquently writes about the way Indian history has been written during the Muslim and British years of rule, excluding Hindu kings, queens and even early Muslim rulers. We need stories of pre-Islamic Bharat also; not just the history of Bharat with capital in Delhi — Delhi Centric, considered as ‘mainstream history’  in relation to the ‘regional history’.

“Do the Vijayanagar Empire (that ruled for more than three centuries from 1336 to 1646) or the mighty Karkota Dynasty of Kashmir or the Ahoms of Assam constitute ‘regional stories’ and the Delhi Sultanate the ‘mainstream history’ of India and not of a limited region?” asks Vikram Sampath. A very pertinent, piercing, question.

The most obsolete and short-lived, dynasties of Sultans with limited territories that ruled in and around Delhi became great history — those Tughlaqs or Lodhis or Khiljis. Yes Mughals ruled for a longer period. But what was their contribution beyond a few architectural structures? Exotic attire and, of course, the mouth-watering cuisine?

Unfortunately, nobody wrote in as much detail about dynasties in the southern part of India — Rashtrakutas, Chalukyas, Hoysalas, Satavahanas, Cholas, Pandyas, Wadiyars (of Mysore), Varmas of Travancore among others. Many more got buried in legends and folklore. Let it be. Vikram Sampath seems to have set-right this fault-line of Indian history by writing this book. He is reclaiming the forgotten history of India.

Be that as it may, curiously the very first braveheart in the book is Lalitaditya Muktapida of Kashmir (a portrait visualised by an artist from the book is published here).

The book says that there was a magnificent temple named after Martand, the Sun God of Hindu pantheon, built by the architects of the Kashmir’s ‘world conqueror’ monarch called Lalitaditya Muktapida of Karkota dynasty, believed to be the descendants of the mythical Naga King (Serpent King) Karkota of the Mahabharata epic.

Period 724 CE (AD). This was also the period when politico-religious force of the Arab Muslims subjugated several countries across the world and began making violent invasion of India from Sindh, then ruled by Chacha Rai and Raja Dahar. According to history, this was the first Muslim invasion of India. The capital of Sindh, Brahmanabad, close to present Karachi, Pakistan, was pilloried to the last brick. Needless to say treachery by King Dahar’s General was the cause for his defeat. Queen Rani Bai immolated herself, perhaps the first instance of jauhar in India. Dahar’s daughters Suryadevi and Parimaldevi were packed off to the Caliph’s harem by the Arab General Qasim.

Here is an interesting episode. Dahar’s daughter Suryadevi was able to convince the Caliph that Qasim had already ‘used her,’ and therefore she was not worthy of being a part of the Caliph’s harem. An enraged Caliph ordered arrest of Qasim and to be brought to Baghdad packed in a leather bag. Qasim died of suffocation enroute. Later Surayadevi confessed to the Caliph that she lied to him only to avenge her father’s death from Qasim. An enraged Caliph ordered his soldiers to bury her and her sister alive in the ground.

To revert to the Kashmir King Lalitaditya Muktapida, the Arabs could not defeat him. And the king went on a march of ‘Digvijaya’ so on and so forth, his death still remaining a mystery in a far off land.

Now let me turn to present day Kashmir. Old Kashmir was a land of spiritualism,  mysticism and religion. Also of Kashmir Pandits. Buddhism was a dominant religion but Adi Shankaracharya ensured that Hinduism was reclaimed. He visited Kashmir in the 9th century (788-820 AD) and wrote Soundarya Lahari in praise of Shakti  at the top of the Gopadari Hill, now known as Shankaracharya Hill and  the temple  there is known as Shankaracharya temple. There is a Shivalinga and also a statue of Shankaracharya. This temple is situated about 100 kms to the South-West of Srinagar, which is now under occupation of Pakistan (PoK).

Much of Kashmir history mixed with legends and myths comes from Kalhana’s book, a Sanskrit treatise, ‘Rajatarangini’ written in the 12th century —  over 400 years after the two important events I mentioned above happened.

Ironically, the Gopadri Hill, now known as Shankaracharya Hill, has some connection to the present political alliance between several regional political parties in Jammu and Kashmir known as “The People’s Alliance for Gupkar Declaration” (PAGD). Farooq Abdulla is the President of this Alliance. The ancient King of Kashmir Gopaditya granted the land at the foot of the hill to Brahmins who had come from ‘Aryadesa’, according to Kalhana. This area at the base of the hill is now called Gupkar, probably, that is the reason why the Political Alliance is known by that   name, Gupkar Alliance.

A faint history of a glorious Kashmir for those who visit Kashmir to muse and mulch about a land that Jahangir, the Mughal Emperor, called a Paradise on Earth.