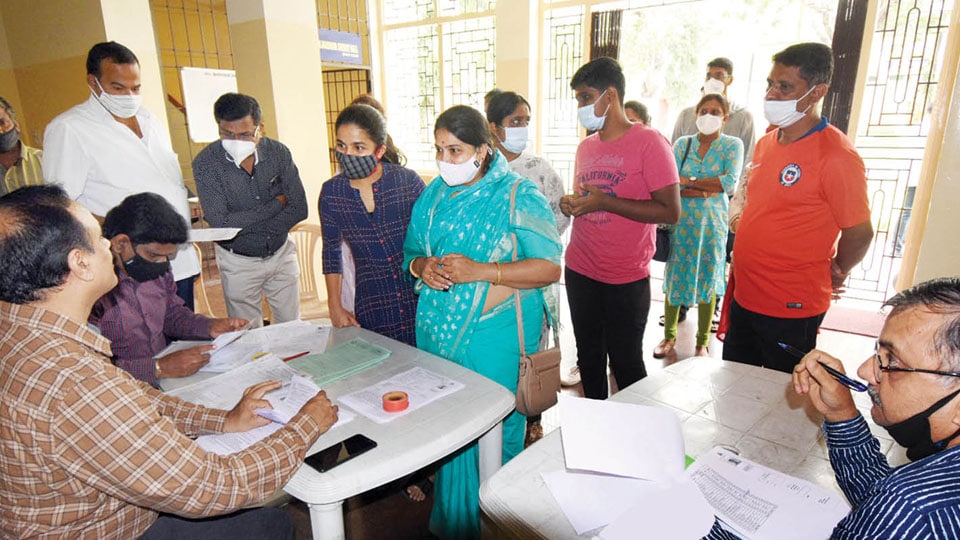 Mysore/Mysuru: Amidst the crisis of Coronavirus pandemic, there is a clamour for cancelling the Karnataka Secondary School Leaving Certificate (SSLC) exams 2021 that are scheduled to be conducted on July 19 and July 22. Over 8 lakh students will appear for  the exams.

The Karnataka Secondary Education Examination Board (KSEEB) has started issuing hall tickets for the examination from today and interestingly, wary of their wards catching infection, parents themselves arrived at the admit card issuing centres in the city.

At the Rotary School on JLB Road where the admission tickets were being issued this morning mostly it was parents who came to collect the cards on behalf of their wards while the students stayed away. Many other centres like the Avila Convent will issue the hall tickets from tomorrow.

“We have personally come here to collect the hall tickets as we are scared and would not want to put children at risk. Though the Department and the Minister concerned have assured us that exams will be conducted in a safe environment, we are apprehensive as the Government will not take responsibility for our children,” said a mother who wanted to be anonymous.

Hundreds of parents arrived at Rotary School to collect admit cards and they were seen posing anxious questions to officials. “Our children are not in a state of writing exam. There is fear. The Government is risking the lives of 8 lakh families, not just 8 lakh students,” another parent said.

PIL dismissed: Meanwhile, the Karnataka High Court this afternoon dismissed a Public Interest Litigation (PIL) on the conduct of SSLC exam. Justice B.V. Nagarathna and Justice Hanchate Sanjeev Kumar heard the PIL and gave a green signal for the Government to conduct the exams as per the schedule.

The Court said that the Government and KSEEB must ensure all precautions. “The State Government must formulate a set of Standard Operating Procedures (SOPs) and strictly adhere to the guidelines,” the Court ordered.

The PIL was filed by S.V. Singre Gowda. Taking into account thousands of students in rural areas, most of them did not have any facility for online classes and there are many areas where not a single class has been conducted and that is why the exams have to be cancelled, the PIL said.