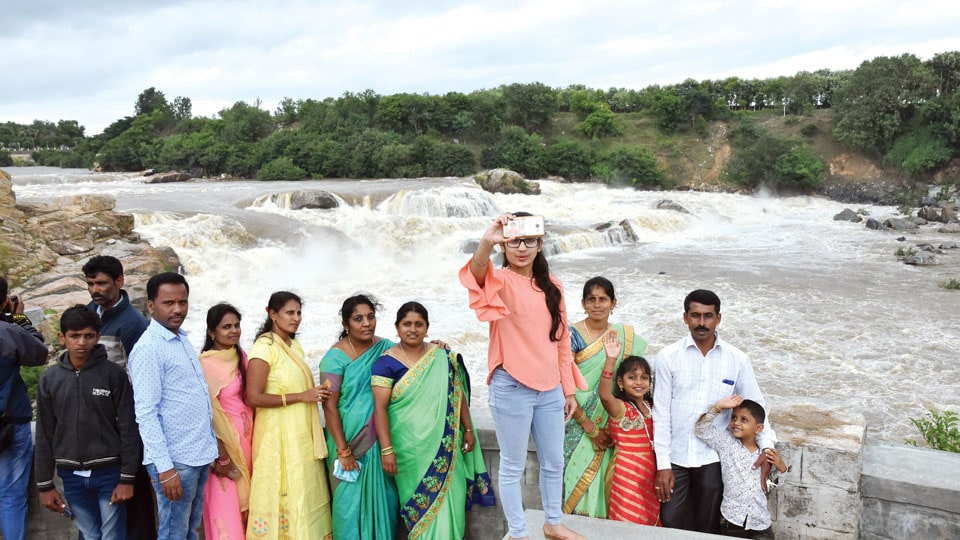 Mysuru: Chunchanakatte Falls in Mysuru district is a place where one can see nature’s bounty in full flow. The spot is called Dhanushkoti waterfall, located at Chunchanakatte village near K.R. Nagar and it is around 55 kms from Mysuru.

With heavy rains since the last four to five days, Cauvery, the lifeline for Mysuru and Mandya farmers, is full and hundreds of tourists are visiting the spot. The river that takes birth at Talacauvery in Kodagu reaches KRS in Mandya district.

At Dhanushkoti, before the water reaches KRS, water falls from a height of more than 60 feet like milk foam and it attracts tourists in hordes. They capture the magical moments on their cameras and mobiles apart from clicking selfies.

Also, water flows with great force here as a private company produces electricity 300 metres away from Chunchanakatte Falls. Though sirens are sounded before the water is released, some tourists lose lives as they step into water, despite warning.

The Taluk Administration has provided security near the Falls. Tourists are first visiting Anjaneya, Kodandarama and Seetha Devi Temples near the  river banks and then going to watch the cascading waterfall.

Legend says that there is a Seetha Devi ‘madu’ (whirlpool) at Dhanushkoti. During Ramayana Seetha Devi used to take bath in this place and one day, Lord Ram’s brother accidentally came near the place without realising that Seetha Devi is taking bath. To prevent such occurrences, legends say, Seetha Devi built a protective wall with boulders around the whirlpool.