Home » Feature Articles » What came first: The world or life? 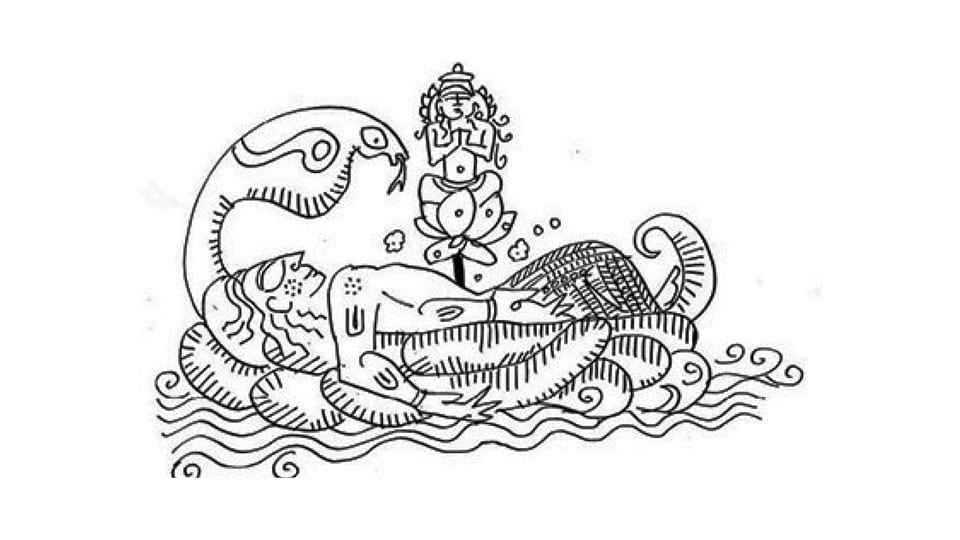 What came first: The world or life?

In Puranic metaphor, mind is male and matter is female. The world begins when Vishnu ‘wakes’ up. Thus, creation does not mean the creation of material world, but the awareness of the material world by the mind. This Hindu story of creation is very different from the Biblical concept of creation, in which God creates the world in six days, with life on the third day. Creation in Hinduism is psychological, not physical; it is about awareness of matter, not appearance of matter.

The earliest organisms to appear are focused on survival and do not ‘see’ the world as it is, but only as opportunity (food, mate) or as threat (predator, rival). Even plants and animals do not reflect on the nature of world. This starts only with humans. In Hindu mythology, this is explained as Brahma emerging from the lotus flower, frightened, lonely, unable to make sense of the world.

He ‘sees’ a woman, who he claims to be his creation, so his daughter, and seeks to possess and control her, an act for which he is beheaded by Shiva. Brahma’s desire thus sets forth in motion the cycle of life: he becomes Creator, and Shiva, who stops his desire, becomes Destroyer. This again is not creation or destruction of the world, but creation and destruction of ‘desire’ or ‘hunger’, the forces that propel life. Brahma creates life, not world, by submitting to desire; Shiva destroys life by destroying desire. Brahma is Bhogi, Shiva is Yogi.

READ ALSO  Beyond justice and forgiveness

Vishnu is Preserver. From his navel rises the lotus that gives birth to Brahma. He understands Brahma’s ignorance. He maintains life by restraining Brahma’s desire as well as Shiva’s rejection of desire. If Brahma is a householder who seeks a wife, and Shiva is hermit who rejects marriage, then Vishnu is the hermit-householder, living in a household without getting attached to anything. Again, this is a psychological state, not physical.

The Goddess embodies the physical side of the universe. She is matter. She is the world that exists before life comes and even after life goes. In other words, she exists before Vishnu wakes up and even after Vishnu goes to sleep. She is mother from whose womb life is created and daughter who is created in the mind of humans. As mother she is objective reality; as daughter she is subjective reality. Thus, Brahma’s incest is not to be taken literally; it is a metaphor for our attachment to the world we imagine.

This complexity of Hindu Puranas was dismissed as gobbledegook by colonial translators in the 19th century. Hindus also could not explain the metaphorical nature of their scriptures, why metaphor (rupak in Hindi) is needed for mind and all things psychological that has no form (rupa in Hindi). For Orientalists, the natives of India were too inferior to think in metaphorical terms, a contemptuous attitude seen even today among scientists, who dismiss knowledge systems of traditional and tribal societies. Our ego stops us from appreciating other people’s language. We behave as Brahma, assuming the Goddess is our dominion, and that is a tragedy.