Home » Feature Articles » What God has given to Mysureans, let us not destroy it: Save Chamundi Hill 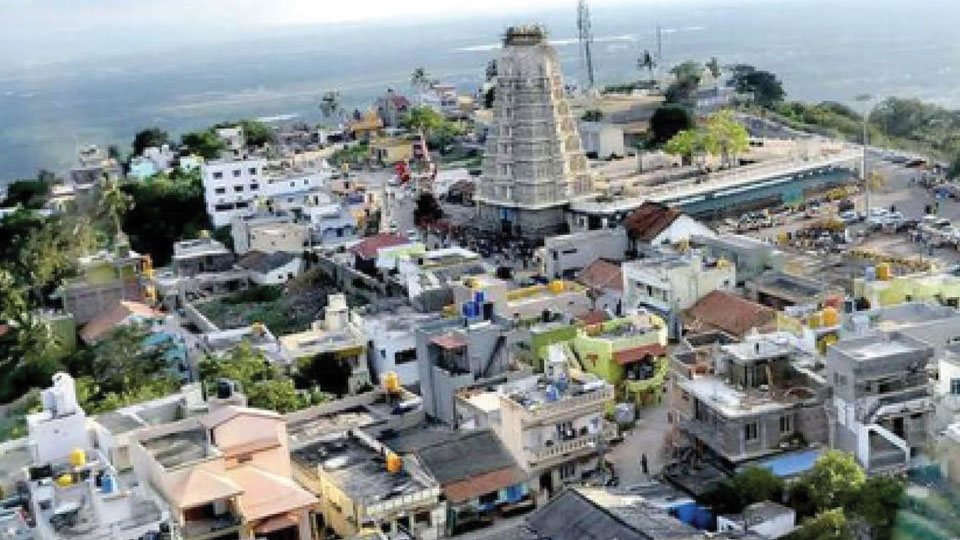 What God has given to Mysureans, let us not destroy it: Save Chamundi Hill

The latest ‘great idea’ to promote tourism under the Pilgrimage Rejuvenation And Spiritual, Heritage Augmentation Drive (PRASHAD) Scheme is to install stainless steel railings on both the sides of 1,008 steps leading to Chamundi Betta. In this background, there is a need to select projects undertaken or proposed to promote tourism during the last thirty years to grade on the best to worst. We can use criteria like environmental protection, tourist attraction, preserving the spiritual space, economic justification, preventing caving of the hills and preserving heritage. However, installation of the railings will require a separate classification. This is because it is comparable to Tughlakian idea of moving capital from Delhi to Daulatabad.

Do these steps need railings? For whom? A Tughlakian idea.

Railings are useful for those aged people who cannot walk without any support. Are aged people interested to climb 1,008 steps to reach Chamundi Hill? Perhaps one person in one lakh, may be fit and daring to climb. In such rare cases, they are unlikely to need railings. Assuming they do need railings, are we justified to meet the needs of few?

Should we use limited resources for a project which not only will not help any one, but in all likelihood harm the existing steps or divert to badly needed projects of preserving the biodiversity of the Chamundi Hill?

Let us now look at the “thousand cuts” that has made Chamundeshwari, which is beloved of Mysureans, to ask us to save her. Even as early as 1994, Karnataka Government had signed a contract for constructing a ropeway on Chamundi Hill with M/s Sikka Traders for Rs. 6.5 crore. Because of the protests led by MGP, it was dropped. Since then the ropeway project has been proposed by new Tourism Ministers or Mysuru’s leaders several times and has been buried each time.

Latest attempt has been to convince the CM to propose ropeway under   “Parvatamala Scheme of Central Government.” More than likely it will also be shelved.

Some of the obvious “thousand cuts” that were already inflicted on the hill are: Construction of multi-storied parking complex, shopping complex, dasoha building and guest houses, and canopy for pilgrims waiting in line to enter the temple, allowing the operations of illegal shops, no restrictions of VIP cars to the gates of temples, concretisation of the hill top by permitting more than 1,000 houses and explosion of population to unsustainable limit of 4,200.

Fortunately for Chamundeshwari, a four lane road was dropped, thanks to the objection by the Forest Department. Project to construct a canopy over the 1,008 steps was dropped, thanks to protests by activists. Latest “thousand cuts” proposed is a set of projects under  PRASHAD to beautify the hill top and add some more to concretisation.

Chamundeshwari wants us to leave nature to itself rather than us homo-sapiens interfering with it. It is worth pointing out the unintended benefit of recent caving on the roads to support the suggestion of nature taking care of itself. Since the caved road has been blocked for vehicle movement, walkers are able to enjoy the chirping of the birds, enjoying the enchanting dance of peacocks and seeing the roaming of wild animals. If nature can rejuvenate so quickly, imagine how the entire reserve forest of Chamundi  will look a few years down the road if we not only stop further concretisation, but start de-populating the top.

Can we pay attention to the cries of Chamundeshwari and give up all proposed projects to attract tourists? What we need are ideas to green Chamundi Hill.

4 COMMENTS ON THIS POST To “What God has given to Mysureans, let us not destroy it: Save Chamundi Hill”