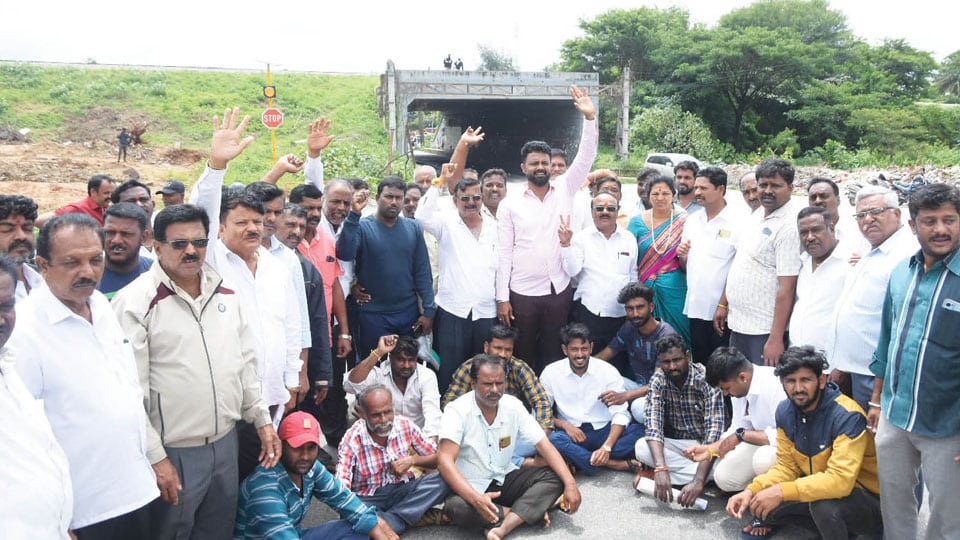 Mysore/Mysuru: Asserting that the Railway Underpasses on the Ring Road are accident-prone due to their unscientific nature,  JD(S) activists led by Corporator K.V. Sridhar staged a demonstration near the Underpass of Mysuru-Arasikere Railway track on Ring Road, close to Hotel Royal Inn Junction on KRS Road, this morning. They sought widening of the Underpass stretches in order to avoid frequent and fatal accidents.

Maintaining that Underpasses were built in an improper manner over two decades ago, Corporator Sridhar said that the roads at  Underpasses on Ring Road at Arasikere Railway track, Belavatha and near RBI are very narrow.

Pointing out that the four-lane Ring Road narrows down to two-lane  at the Underpasses which pose danger to motorists, especially two-wheeler riders, he said that frequent accidents at these stretches leading to loss of lives in some cases  are being reported almost every other day. But despite several representations seeking widening of the Underpass stretches to the District Administration, Railways and other Departments concerned, nothing has been done to rectify these unscientific stretches on this important road, which is widely used by motorists.

Noting that thousands of vehicles travel daily on the ever busy Ring Road that connects KRS Road with Mysuru-Bengaluru Highway at Manipal Hospitals junction, he urged the authorities to take immediate measures to expand the Underpass stretches in the interests of motorists and to reduce traffic jams.  Stating that the Ring Road is of huge tourist, industrial and commercial importance for the city, he warned of intensifying the stir if the authorities fail to take measures for Underpass widening, which has become an absolute necessity with increasing vehicle density.