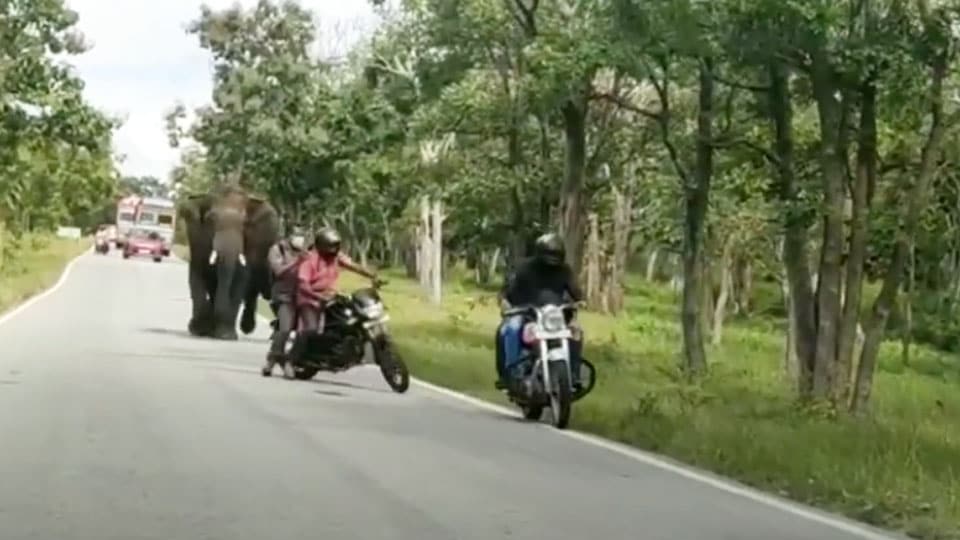 ‘Forests belong to wild animals; do not disturb them,’ say wildlife lovers

Gundlupet: An incident of wild elephant attempting to attack bikers and later chasing them away, has taken place on National Highway (NH)-67, passing through Madhumalai Tiger Reserve in Tamil Nadu, adjacent to Bandipur and the video has gone viral on social media.

On Monday, between 3.30 pm and 4 pm, four persons on two bikes, were proceeding from Bandipur side towards Ooty on NH-67 where a wild tusker was grazing on the roadside.

Assuming that they could pass by the elephant, the bikers tried to pass the elephant quickly, but the elephant suddenly turned towards the road and tried to attack the bikers, who immediately turned and sped away only to be chased by the elephant to a distance. Luckily, no untoward incident took place and the incident was captured on the mobile phone by a car occupant which has now gone viral.

It may be recalled that a similar incident took place last month at the same spot and another similar incident took place near Gudalur in Tamil Nadu where the biker had to leave his vehicle and flee from the spot. The wild elephant had stayed put near the fallen bike for some time and the biker, with the help of others, managed to get his bike after the elephant went into the forest.

Leave them alone, it is their home: wildlife lovers

Meanwhile, wildlife lovers have cautioned tourists not to disturb wild animals as the forests are their homes and they tend to attack people if they  are disturbed.

READ ALSO  Rajini's Into The Wild with Bear Grylls to be telecast on Mar.23

They said that a few tourists while passing by forests stop their vehicles on seeing elephants grazing and go close to them to click selfies which actually disturb the wild animals. This would result in wild elephants attacking tourists and damaging vehicles. “Just leave them alone and you will be safe,” they said.