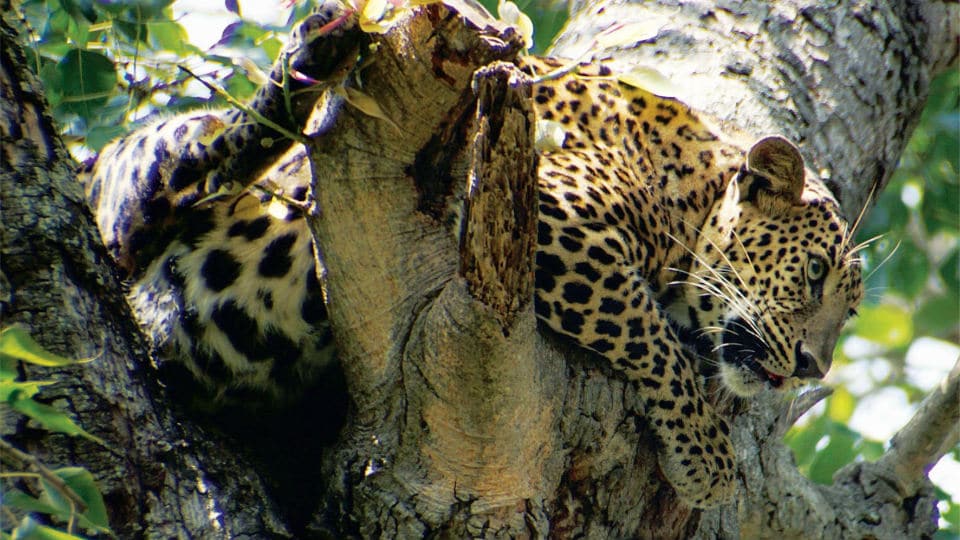 Mysuru: A one-and-a-half-year old wild leopard broke into Mysuru Zoo here this morning creating panic among the inmates. As a result, the Zoo was closed to visitors for nearly three hours.

The leopard was spotted sitting on the Peepul tree around 9 am by Zoo-keepers Raju and Shekar when they were in the Lion-tailed Macaques’ enclosure watching the animals. They heard the Macaques in the enclosure, making noise, which were supposed to be perched on the trees but now sitting on the ground. Alerted by the Macaques’ panic calls, the Zoo-keepers lifted their heads to find the leopard sitting nearly 60 feet above them on the tree.

Immediately they alerted the Zoo authorities. The ‘Operation Leopard’ began with 20 Zoo-keepers, three veterinary doctors and three supervisors. The doctors tried to tranquillise the leopard. They shot darts containing the tranquilliser and only in their third attempt were they successful.

1. The wild leopard perched atop a peepul tree in the Zoo. 2. Vet Dr. K.V. Madan firing a dart to tranquillise the leopard as Dr. Ramesh looks on. 3. The dart hits the target.

Dr. K.V. Madan, the Veterinarian who shot the tranquilliser, told Star of Mysore: “The operation lasted for nearly two hours. We were successful in tranquillising it in the third attempt. The Macaques’ enclosure is dense with lots of trees. The Zoo-keepers spotted the leopard when they were on their routine duty. They were alerted by the strange sounds the Macaques were making incessantly.”

Asked how the leopard could have strayed into the Zoo, Dr. Madan said, “It is very unfortunate that the leopard strayed into the Zoo. It must have entered the Zoo around midnight. Next to the Zoo compound and between where the circus tent is pitched, there is a small patch of forest area. Then there is Karanji Lake, which in turn is connected to Chamundi Hill, where there are a lot of leopards. This is the landscape of the area.”

4 & 5. The Zoo staff spread the net below the tree and carry the tranquillised leopard.

On the success of the operation, Dr. Madan said: “The Lion-tailed Macaques’ enclosure is very dense with lots of fully grown trees. The Peepul tree on which the cub was perched is very tall. My colleagues and I had to tranquillise the leopard that was sitting almost at a height of 60 feet. In our third attempt, we were successful.”

The Zoo-keepers climbed the tree and only when they were sure that the tranquilliser had its effect could they bring the cub down. “I watched the movement of the leopard through the binoculars. Once I became certain that the tranquilliser had worked, the Zoo-keepers climbed tree and brought it down to the waiting net, which was kept spread. The cub is one-and-a-half years old,” he said.

B.P. Ravi, Addl. Principal Chief Conservator of Forests and Member Secretary of Zoo Authority of Karnataka (ZAK), addressing the media, said: “We came to know about the presence of the leopard on the top of a tree in the monkey enclosure around 9 am. Immediately we checked and found that the leopard did not carry a number and we realised that it is not from the Zoo and must have strayed from Chamundi Hill, where there is a concentration of leopards.”

According to Ravi, the leopards have the capacity to climb trees. “We still have to look into how the leopard could have come all the way from the Hill to the Zoo escaping the eyes of people on the roads,” he said.

It will be kept under observation in the Veterinary Hospital in the Zoo premises. 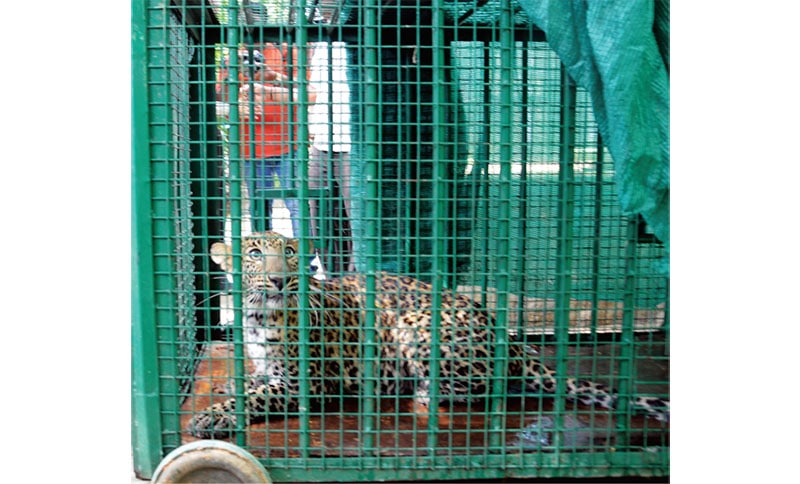 The leopard cub looks lost inside the cage.

The Chamarajendra Zoological Gardens is a popular tourist destination in Mysuru. Many visitors had gathered outside the Zoo from morning itself. However, they were denied entry with a signboard saying, ‘Due to technical reasons the Zoo is closed. Please cooperate.’ The visitors were waiting for the Zoo to open, as they did not know that a leopard had strayed and efforts were on to rescue it.

ZAK Chairperson Mallige Veeresh, speaking to the media, said that she was kept in the dark about the presence of the leopard inside the Zoo. “I came to know of it only through the media. The higher officers keep ignoring me though I am the Chairperson. It looks like the security has failed in this instance since a wild leopard has strayed into the Zoo,” she said.

Once the ‘Operation Leopard’ was successful, the Zoo was thrown open to the visitors.