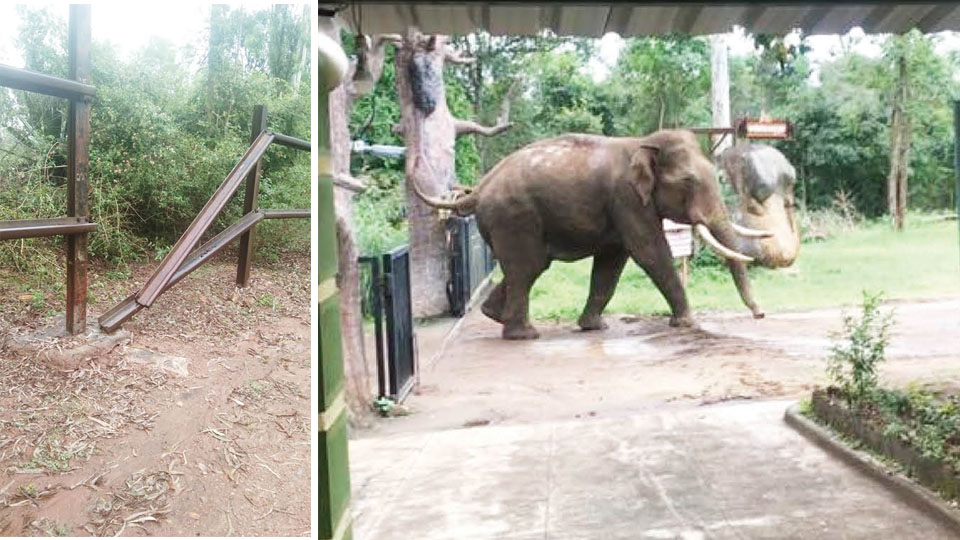 As the railway barricades were destroyed by the tusker, it made way for other wild elephants and a total of nine elephants had entered the human habitat. The Forest Department personnel, who immediately swung into action, drove the elephants back into the forest but the wild tusker had stayed put at the wood lot stored near Nagapura School.

Finally, additional Forest staff, who arrived at the spot, burst crackers and managed to drive the tusker back to the forest through Veeranahosahalli main gate with the help of villagers.

It may be recalled that on Oct. 21 morning, a wild tusker that had entered into the Tibetan settlement from the Nagarahole National Park from Sollepura area under Veeranahosahalli Range and camping deep inside banana and jowar plantations since the last two days, was spotted eating crops near a wooded area and villagers gathered to drive it back to the jungle.

They formed groups and began shouting and pelting stones at the tusker. The pachyderm was driven to the forest through Hosa Penjalli area of the Tibetan camp.

The tusker had already destroyed most of the plantation and went on a rampage as it saw people around. Villagers alerted the Forest Department but none of the officers and staff bothered to visit the area immediately.

But when the Forest staff arrived after some time, they rushed to the spot and took over the task of driving the tusker back.