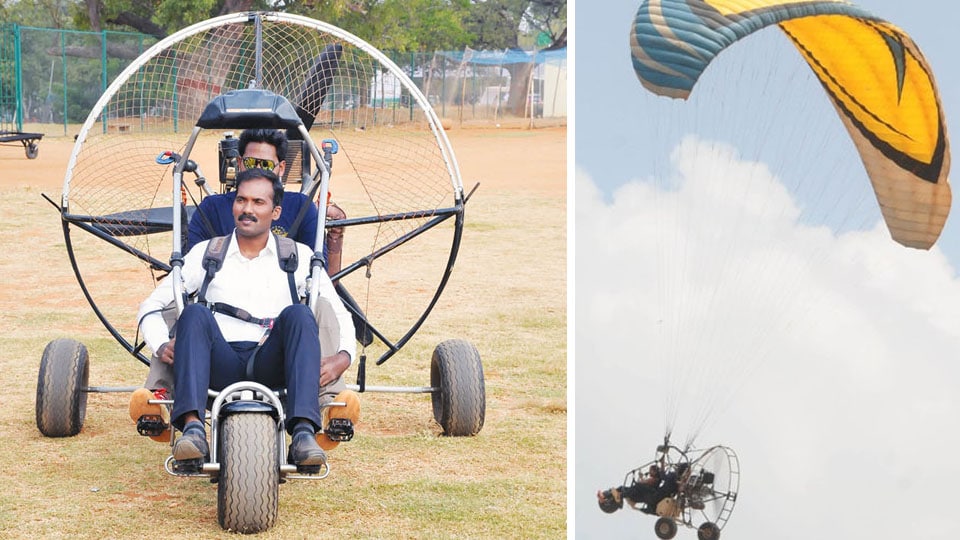 Mysuru: Additional Deputy Commissioner T. Yogesh inaugurated the Paramotor Gliding Adventure Sports by himself flying on a Paramotor this morning. The sports has been organised as part of Winter Festival 2018 at Maharaja’s College Cricket Grounds in city.  This sports event was organised jointly by District Administration and Department of Tourism as part of promotion of adventure sports besides to boost tourism as large number of tourists, local visitors throng city on the eve of Christmas and New Year Celebrations.

The Paramotor Gliding that began today will be held till Jan. 1. However, there will be no flying if there is rain, heavy winds and misty atmosphere.

Later speaking to reporters, ADC Yogesh said that the event gives flyers a thrilling experience. “Flyers can enjoy the aerial scenic beauty of heritage city during eight minutes of gliding,” he said.

The District Administration has given permission to Bangalore Aviation and Sports Enterprise (BASE) to conduct the event after taking all necessary permissions from aviation department. The government is promoting this sport as it had received huge response from adventure buffs in the recently held Dasara celebrations.

A large number of youths and adventure sports enthusiasts were present this morning to witness the inauguration. The two-seater glider (one for the pilot and one for the passenger) can take a person on an 8-minute ride to have a glimpse of Mysuru city for a price of Rs. 2,000.

The organisers have kept two gliders Kumaraswamy and Siddartha for the sport activity. One can fly up to 6,000 ft high depending on air flow conditions. The event will be held daily from 8 am to 5 pm. Deputy Director of Tourism R. Janardhan and others were present.