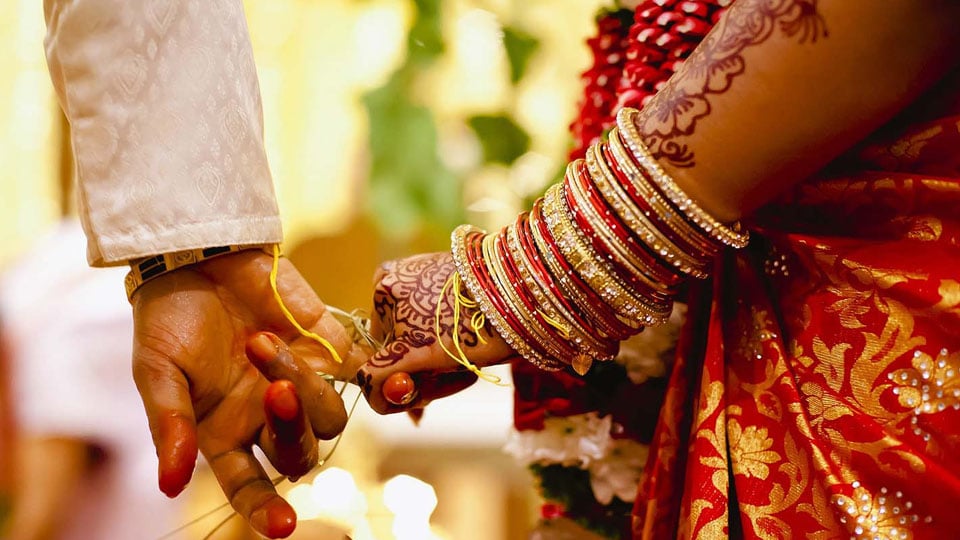 Mysore/Mysuru: In a strange turn of events, the marriage dreams and plans of a woman were spoiled after the groom married his girlfriend just two days before the scheduled wedding. The bride’s parents have now approached the Police seeking reimbursement of the money that was spent on the marriage preparations.

The incident occurred in city and the marriage was scheduled on Dec. 9. According to Krishnaraja Police Inspector Srinivas, 29-year-old Umesh, a resident of Sunnadakeri was in love with a woman and despite this, he agreed to a marriage alliance fixed by the family.

The bride too was from Sunnadakeri and as per astrological predictions the date was fixed as Dec. 9 and Sri Mahadeshwara Temple Community Hall at K.R. Mohalla as venue. An engagement was held at a venue and both the would-be couple smiled for photographs. The bride’s family was preparing for the wedding and if everything went on smoothly, the couple would have tied the knot on the fixed date.

But the groom was in love with a woman from a village near Bannur, Inspector Srinivas said. Umesh works in a private bank and since the last four years he was in love with his colleague. He, however, hid this from his parents and would-be wife.

However, on learning about Umesh’s wedding plans, his girlfriend approached the parents of his would-be wife and showed them photos and messages that in a way was a proof to the relationship, the Police Inspector said. Before this, Umesh’s girlfriend messaged his would-be wife and shared the photos and told her that Umesh was getting married as the parents forced him to do so.

Taken aback by the sudden development, the bride’s family approached the Police Station and later, a compromise formula was reached where Umesh and his girlfriend were to get married and the would-be bride would be paid all the money that was spent on wedding preparations including engagement costs. Accordingly, Umesh and his girlfriend married each other at a temple. But the issue did not end here as Umesh failed to pay money for the other woman’s family. The father of the woman filed a complaint against Umesh and his family members. Inspector Srinivas said that a complaint has been filed and the issue is not settled. He said that he would summon both the families and sort out the matter.