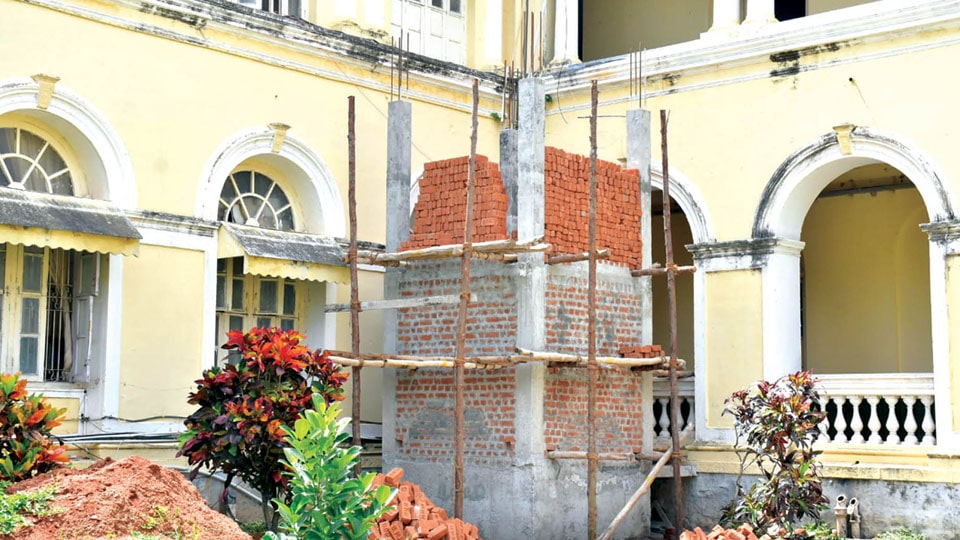 To adhere to recommendations from District Heritage Committee

Mysore/Mysuru: The move of University of Mysore to construct two lifts in the two-floor Crawford Hall, a heritage building, has now been stopped following criticism.

Crawford Hall was built in 1947 and the administrative offices of the University are housed in the imposing structure adjacent to the scenic Kukkarahalli Lake. The Offices of the Vice-Chancellor, the Registrar, the Registrar (Evaluation), the Finance Officer and the Public Grievance Cell are located in this building. And the University began constructing the lifts at South and North side of the Crawford Hall.

Following the objection from heritage lovers, the University authorities have clarified that they will wait for a nod from Department of Archaeology and Heritage and District Heritage Committee whether to go ahead or shelve the construction of the lifts. The proposed lifts have a capacity of carrying 10 persons each at a time.

Prof. G. Hemantha Kumar, Vice-Chancellor of the University told Star of Mysore that member of District Heritage Committee Prof. N.S. Rangaraju — who is also a retired Professor of the University — had visited the construction site on Wednesday and sought details of the project.

Prof. Rangaraju told Registrar Prof. Shivappa that even if a minor change is made to any heritage building, permission from the Committee was mandatory. If the University requires a lift, it must seek guidance from the Committee on the ways and means of construction without spoiling the heritage aesthetics.

“We wanted to build lifts at two places in the Crawford Hall following a suggestion from Disabled Welfare Department recently to help those with physical disability to reach the second-floor of the administrative building. Since the District Heritage Committee has its reservation over the lift in the heritage structure, we will wait for the green signal from the authorities concerned on the fate of the two lifts. We will go ahead if approved or shelve, if not. We are ready to modify the plan as per the expert suggestion,” Prof. Hemantha Kumar explained.

According to heritage lovers who took umbrage over the lift construction, the modern lifts would spoil the heritage nature of the Crawford Hall. The University authorities have, however, clarified that they will not meddle with the heritage character of the building and follow the                              guidelines issued by the Heritage Committee.

This is not the first time that a lift is being constructed at a heritage structure. Nine months ago, the Mysore Medical College and Research Institute (MMC&RI) had initiated a project to construct a lift near the main entrance of the College.

The PWD had taken up the work of installing the lift at an estimated to cost Rs.11 lakh and the cost of lift and electrical works was estimated at Rs.36 lakh. However, following objections from the Heritage Committee, the lift construction work was abandoned. Even now the bricks and construction materials have not been cleared from the site. The MMC&RI building houses the Dean and Director’s office, Chief Administrator’s Office, Administration Office, laboratories, classrooms and auditorium. Hence, to facilitate the Professors, staff and students to reach the first floor easily, the lift project was initiated.