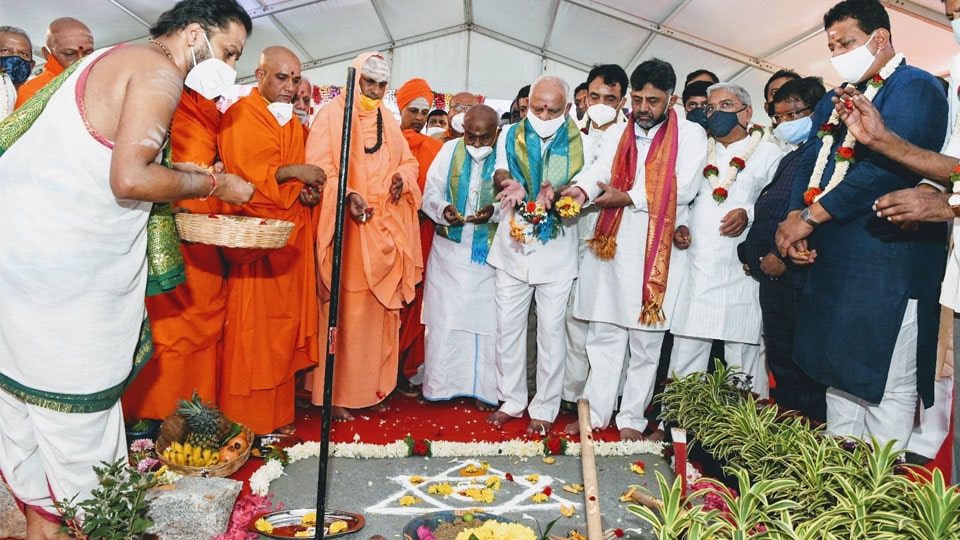 Work on Kempegowda’s giant statue takes off in Bengaluru

Bengaluru: On the occasion of the 511th birth anniversary of Nadaprabhu Kempegowda, the Founder of ‘Bendakalooru’ aka Bengaluru, Chief Minister B.S. Yediyurappa this morning laid the foundation stone for the construction of Nadaprabhu’s mammoth 108-feet bronze statue at the Bengaluru Airport in Devanahalli named as Kempegowda International Airport. It is the country’s third busiest airport in this tech city.

The 23-acre central park that will be built as a tribute to the Founder of new Bengaluru will transform into a spectacular place of visit, the CM said. In view of COVID-19 pandemic, the bhoomi puja was organised in a meaningful way with very few people by ensuring physical distancing and without any violations. The CM also unveiled the miniature model of the Kempegowda Statue. The programme was webcast on YouTube, Facebook, Twitter and Instagram.

The statue has been planned to be built between two runways for it to be seen by national and international commuters who can learn about the person who built Bengaluru. In Karnataka, the Kempegowda statue is slated to be the tallest one and will tower over the Gommateshwara Statue at Shravanabelagola in Hassan which stands at 57 feet.

The mega project has been designed by the Infrastructure Development Corporation (Karnataka) Limited (iDeCK), while noted sculptor Ram Sutar will install the statue. Sutar was the main sculptor of the 597 feet Statue of Unity – Sardar Vallabhbhai Patel — in Gujarat and the Gandhi Statue located between Vidhana Soudha and Vikasa Soudha.

Born on June 27, 1510 at Magadi in Bengaluru’s s northwest suburb, Kempegowda built four towers in the North, South, East and West of the garden city, with a view to limiting its growth up to a point at 3,000-feet above the sea level. He also developed water bodies, including lakes and tanks for its supply to its people throughout the year.

Nadaprabhu’s birthday celebration is meant to educate the people on the Founder’s grand vision, planning and building a futuristic city. “Kempegowda’s development works, including building the city’s infrastructure during his regime inspires us even after 500 years,” said Dr. Ashwath Narayan.

The State Government will also develop Kempapura village in Magadi taluk, where Kempegowda’s tomb is present, as a historical destination, he said adding that it will be an all-season tourist centre.

Kempegowda Development Authority which is managing the restoration and protection of Kempegowda’s monuments in the State will oversee the statue’s construction. The statue has been a long-pending demand of the people of Karnataka, the Dy.CM asserted.