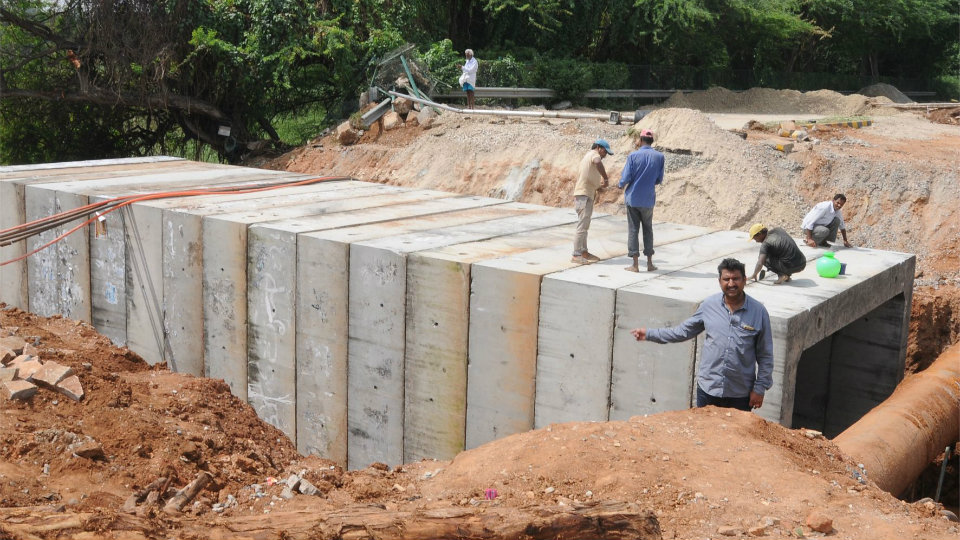 Mysuru: The works on installation of magic boxes on Hunsur Road between Paduvarahalli and Kukkarahalli lake is going on at a fast pace. The Mysuru City Corporation (MCC) has taken up the installation works after the recent rains caused havoc in the areas where the rainwater mixed with sewage entered most of the houses on first and second main in Paduvarahalli.

Chief Minister Siddharamaiah, who conducted an inspection in the area, was flooded with complaints on flooding and rainwater entering the houses.  Following this, MCC took up the works of installing the magic boxes between Paduvarahalli and Kukkarahalli Lake to ensure the easy flow of rainwater into the lake to prevent water logging in the area.

Each of the magic boxes being installed is 3.9 mts in height and 5.3 mts in width. Currently, 17 such boxes have been installed and there is a need for few more of them to complete the process. Hence, the MCC decided to construct few more  boxes at the spot to overcome the shortage.

The works on the installation of magic box has been given to contractor Jagannath, who has been carrying out the works to ensure it is completed as early as possible.

Road widening work yet to commence

The straightening of Hunsur Road, which was inaugurated by Mysuru-Kodagu MP Pratap Simha, District In-charge Minister Dr. H.C. Mahadevappa and MLA Vasu on Nov.6 is yet to take off. The works, which is expected to commence near Kalamandira will end near the Chandravana Nursery on Hunsur Road.