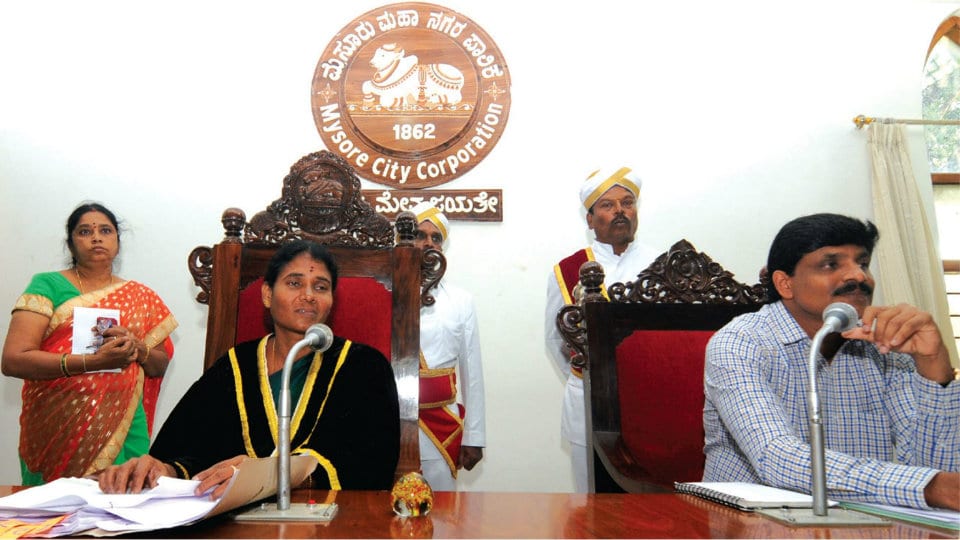 Salaries of contract Pourakarmikas to be credited to their accounts

Mysuru: Here is some good news for hundreds of contract Pourakarmikas working round-the-clock to keep our city clean. Following complaints that their contractors were not paying them their salaries properly, the Mysuru City Corporation (MCC) has decided to credit their salaries directly to their bank accounts.

A decision in this regard was taken at the Council Meeting held at Nalwadi Krishnaraja Wadiyar Hall yesterday. The meeting was chaired by Deputy Mayor Rathna Lakshman. Along with the direct credit of salaries, a decision was also taken to provide Provident Fund and ESI benefits to contract Pourakarmikas.

Speaking on the issue at the meeting, MCC Commissioner G. Jagadeesha said that he has received many complaints regarding non-payment of salaries on time by contractors of contract Pourakarmikas. The contractors were also denying PF and ESI facilities and were in a way responsible for exploitation of workers.

He said that even the State Government had published in the Gazetteer that local bodies have the responsibility of crediting salaries of contract workers directly to their accounts and also provide ESI and PF facilities. He said that the proposal will be placed before the Council Meeting that will be chaired by the Mayor on Nov. 30 and will be implemented from Dec.1.

The Commissioner told the meeting that the MCC was using 22 tippers for waste disposal in the city and most of them are in bad condition and some of them don’t even have Fitness Certificates. He said that the MCC was planning to buy tippers stage-by-stage.

Many Corporators expressed their displeasure as the grants under 24.10 SC/ST development funds have not been implemented properly to realise the desired goals. They said that since the last one-and-a-half years, the grants have not been utilised properly and crores of rupees are lying unused. Blaming the officials for not utilising the money, Corporators warned that they would disrupt the next meeting if the grants were not utilised immediately.

The Council took up the issue of 20-year lease period that has been granted to two petrol pumps on Sayyaji Rao Road.

Speaking on the issue, Corporator S.B.M. Manju suggested that instead of a 20-year lease that will limit the income source to the MCC, such commercial set-ups must be given on a three-year lease and the lease amount must be revised every three years.

The issue of solid waste disposal was raised in the meeting by former Mayor B.L. Bhyrappa, who said that the J.P. Nagar Solid Waste Treatment Plant handles waste more than its capacity and the smell emanating from the Plant has made the lives of the residents miserable.

Cornering the MCC Commissioner, Bhyrappa alleged that the officer was not showing any interest in solving this problem and it is not possible to set up another Waste Treatment Plant in the next 10 years. He said that due to the smell, the area has been attracting wild animals and stray dogs and asked the Commissioner to visit the place to have an idea of the problem.