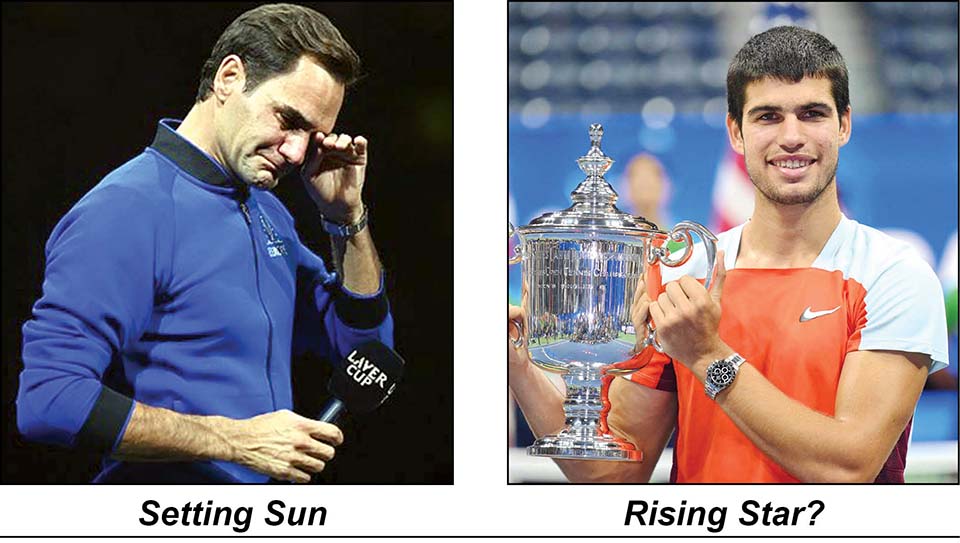 Now that the 2022 tennis season is over one can review the important tournaments and performance of some of the top players. Of the four Major tournaments (aka Grand Slam Events), two were won by Rafael Nadal and one each by Novak Djokovic and a19-year-old Spanish sensation Carlos Alcaraz Garfia. The prestigious year-ending ATP finals was won by the old horse Djokovic.

Among the eight Masters 1000 tournaments, Alcaraz has won two and one each by Djokovic, Taylor Fritz, Stefanos Tsitsipas, Borna Coric, Carreno Busta and the 19-year-old new comer Holger Rune.

However, the breaking news of the year of course was the retirement of legend Roger Federer. Now at 41, he has played competitive tennis for nearly two and a half decades and won 103 career titles including 20 Majors. His farewell speech at the O2 Arena in London during the Laver Cup competitions was truly emotional. Though all most all of his records have been overtaken or equalled by the likes of Nadal and Djokovic, many analysts, practically all fans and some past champions believe that he is the Greatest tennis player of all times — GOAT.

Meanwhile, Nadal has broken the glass ceiling of 20 Major titles by winning the Australian Open this year. He then raised the bar to 22 by winning the French Open as well. A pleasant thing to happen to him this year is the birth of a baby boy in October. All his fans and other tennis players have congratulated him and wished his wife and the baby good health and happiness.

READ ALSO  An exhaustive and painstaking compilation on Veer Savarkar

Due to his determined attitude of not getting himself vaccinated against COVID, Djokovic was not allowed to play the Australian Open as well as miss the entire North American circuit which included four Masters 1000

tournaments and the prestigious US Open. However, his only consolation is that by winning Wimbledon, he also crossed the threshold of 20 Majors and is just one behind Nadal. Also, during the year, he reached a peak of 373 weeks as World’s No. 1 player, 63 weeks more than the second best. Again, by winning the ATP Finals last week for the sixth time he equalled the record so far held by Federer and overtook the likes of Ivan Lendl and Pete Sampras!

Three years back in this column, I had listed a dozen next-gen players (17 to 21 years of age group) as future Major title winners. Unfortunately, only two of them won one title each (that too after crossing 24 years of age), a couple of them reached up to the finals, some are languishing in the top 20s and remaining just faded away. This is because they could not break the brick wall like performance of the three great champions. Yet at the end of last year an 18-year-old Spaniard named Alcaraz appeared from nowhere and started winning smaller tournaments. This year he won two Masters 1000 tournament and capped it with winning the US Open. He also became the youngest World No. 1 ranked player, a unique honour indeed. When Federer was asked by a reporter whether he thought that Alcaraz would be a great champion like Laver or the present three champions, Federer replied that Alcaraz would have to win at least six Major titles before making any such judgement. Very well said indeed.

As the sentiment in favour of Federer is now at its peak, naturally many experts have ranked him as the GOAT. But one cool minded analyst (from NYT?) has written that the race is not over until both Nadal and Djokovic retire and the performance of all three are quantitatively analysed. Again, well said indeed.