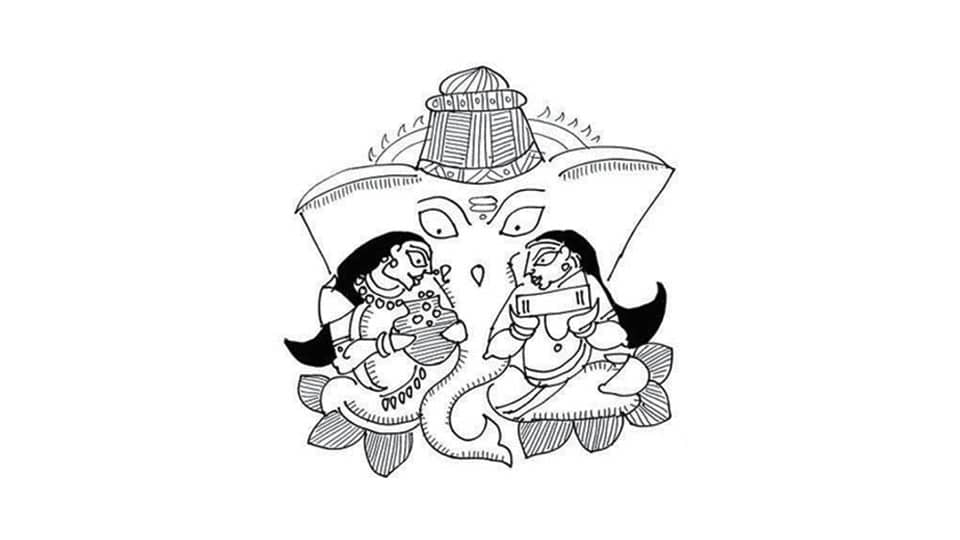 You want Wealth or Knowledge?

In popular lore, Lakshmi and Saraswati hate each other. Where there is fortune, there is no respect for education, and where there is education, there is no value for wealth. The courtesan’s house was the only place where the two lived together: she was well versed in music and dance and the arts, and was admired by the learned and the rich.

In festivals, the two Goddesses are shown as daughters of Durga. Or, they sit on either side of Ganesha, identified as his two mothers, or his two sisters, or even his two wives, Riddhi (material growth) and Siddhi (intellectual growth). What is most interesting is that the earliest image of Lakshmi comes to us from Buddhist stupas, and the earliest image of Saraswati comes to us from Jain Mathura art, and both Buddhism and Jainism are monastic orders, that frown upon wealth as well as the performing arts.

Saraswati, Goddess of performing arts and learning, is visualised as dressed in white. She holds a veena, or a lute, or an ektara, in one hand. In the other hand, she holds memory beads. She rides a goose (hamsa). The goose is a special animal. In Indian mythology, it is believed to have the ability of separating milk from water.

Thus, it is the symbol of analytical skills, which is necessary for knowledge. Saraswati is said to be distant and aloof. She doesn’t care for anyone. It is very difficult to get her; but, once she comes into your life, she doesn’t leave you. This is in contrast to her sister, Lakshmi, who is whimsical, and faithless, coming when least expected and leaving without notice. Lakshmi, Goddess of wealth and fortune, is visualised as seated on a lotus flower. She also holds lotus flowers in one hand and, in the other, a pot, overflowing with grain and gold. When one dies, one leaves one’s wealth behind, but not one’s knowledge. All we can leave behind is a bunch of information, recorded in texts.

The Goddess Lakshmi is considered the consort of Vishnu. The Goddess Saraswati is considered the consort of Brahma. These ideas emerged in Puranic times. They bring a sense of symmetry, by seeing each God having a Goddess. But, Saraswati is more often than not visualised independently. Lakshmi, on the other hand, is associated with many Gods: Asuras, Yakshas, Nagas, Indra, Ganesha and Vishnu. In early Gupta art, both Saraswati and Lakshmi were considered wives of Vishnu, but due to their quarrels, Vishnu gave Saraswati to Brahma, though some say she hid in Vishnu’s mouth while Lakshmi sat at Vishnu’s feet.

If business establishments are the temples of Lakshmi, then schools are the temples of Saraswati. But, increasingly, schools are focussing only on vocational training, on skills, not on music and art and literature, nor on spiritual knowledge, all of which constitutes Saraswati. Her goose is the symbol of critical thinking and discernment. Likewise, businesses are trained to chase Lakshmi as Indra does, rather than attract Lakshmi as Vishnu does. Indra does not share        his fortune while Vishnu is Achyuta, one whose glory never gets depleted as he keeps investing in others. These are nuanced understanding of the Gods that we as Indians seem to have forgotten.