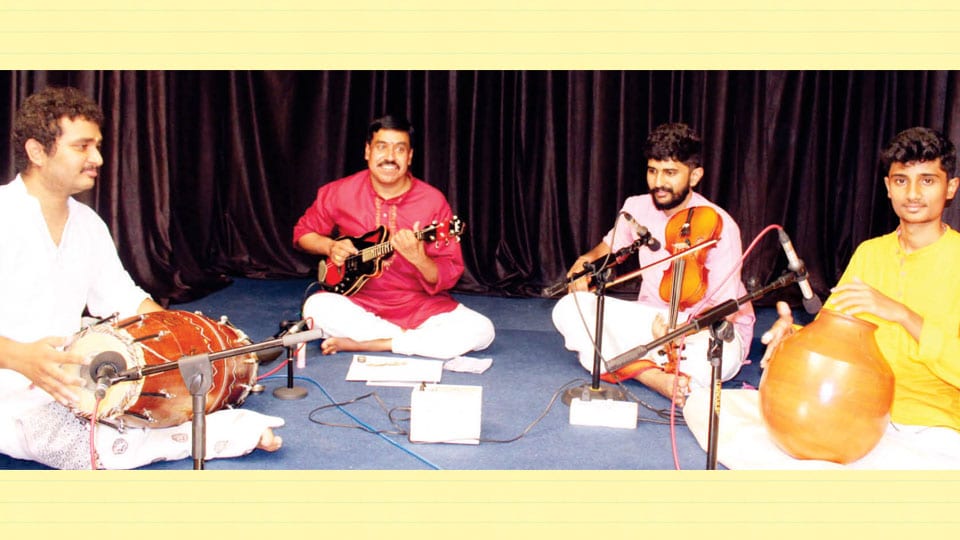 Mandolin is a western instrument which naturally appeals to one by its melodious sound. Vishwanath initially learnt the art of mandolin playing from Vid. K.S. Manjunath. Later he came under the tutelage of senior violinist, Vid. H.K. Narasimhamurthy, where he gained the skills in classical music for several years. Besides classical music, Vishwanath is also a popular artiste in ‘Sugama Sangeetha’ field and has the credit of performing with acclaimed artistes — C. Ashwath, Raju Ananthaswamy, M.D. Pallavi, Puttur Narasimha Nayak etc.

An attractive thani avarthana by Vid. Nandan Kashyap and Vid. Shamith S. Gowda on mridanga and ghata respectively, complimented the concert. The concert concluded with the devaranama ‘Anthakana Dootharige’ by Purandaradasa (Bageshree, Khandachapu). There is no doubt that the concert gave a sense of fulfilment and soukhya to the rasikas.

Vidu. S. Chaitrika presented a vocal concert, which was premièred on Dec. 12 as the 6th in the series. This talented young artiste is a disciple of senior musician, Vidu. Dr. R.N. Shreelatha.

Chaitrika began her concert with the popular varna ‘Erana Pai’ of Patnam Subrahmanya Iyer in Thodi raga set to Adi tala with enthusiasm and took up the rare kruthi ‘Shree Mahaganapathi’, a composition of Karur Dakshinamurthy in raga Behag and tala Rupaka as the next item.

She then selected one of the melodious vivadi ragas, Vagadheeshwari and presented Veena Venkatagiriyappa’s composition, ‘Shree Janakee Manohara’ in it, with elegant and crisp alapana and refreshing kalpanaswaras. The next krithi was fast paced ‘Kannatandri Naapai’ of Tyagaraja (Devamanohari, Adi) followed by yet another rare krithi of Subbaraya Shastry (son and disciple of one of the trinity of Karnatak music, Shyama Shastry), ‘Ninnuvinaa Gathi Gaanasamvardhini’ in raga Kalyani and tala Adi, aesthetically decked up with alapana and swara prastaras.

Chaitrika drew special attention for her confidence throughout her concert. She concluded the concert with Puarandaradasa’s ‘Seraga Bidayyaa Krishnaa’ (Kapi, Adi). The accompaniments by young artistes, Vid. Amogh Nadadur on violin, Vid. Y.P. Vikram Bharadwaj on mridanga and Vid. Shamith S. Gowda on ghata were proficient and supported the concert well.

There are many Vaggeyakaras whose contribution to Karnatak music remains unknown to the world. It is a welcome trend that the new generation artistes are showing interest to present rare compositions and to throw light on such Vaggeyakaras’ works. Both the concerts by the artistes were successful in captivating the rasikas.