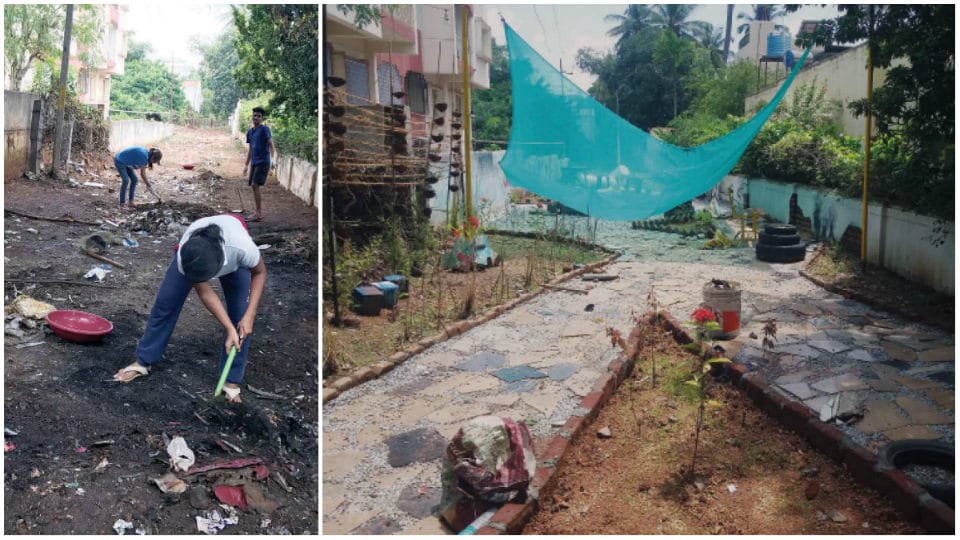 Youth work day and night to transform Galli into Garden

Mysuru: Is India’s young demographic — a dividend or a curse? This is a question begging for an answer, as India will become the youngest country in the world by 2020 with 64 per cent of its population in the working age group.

Hence, the youth have a huge role to play in nation-building. Among the many challenges the country is facing, environment is one such and all efforts are being made to create awareness about protecting it. There is a group of architecture students in Mysuru for whom, Environment Day is not the only special day, but they treat every day as Environment Day and are keen on improving the cleanliness of city.

Conservancy Lanes (Galli in local parlance) are quite unique to these parts of the State. Mysuru had conservancies in the past in well-planned localities like Lakshmipuram, Vontikoppal, Nazarbad, N.R. Mohalla, Krishnamurthypuram, Chamaraja Mohalla, to name a few. The gallis were specifically meant for dumping garbage and the Municipal workers would come and collect it every day. Hence, most parts of the city were always clean, green and fresh.

Nearly 30 students of School of Planning and Architecture (SPA), Manasagangothri, fully understanding the importance of conservancies, have come forward to give them a new look. They have adopted a conservancy adjoining the Kalidasa Main Road in Ward No. 32 in VV Mohalla. Since many years, this conservancy was lying in a state of neglect and used by men for peeing. The result was there was a stench of urine all the time. 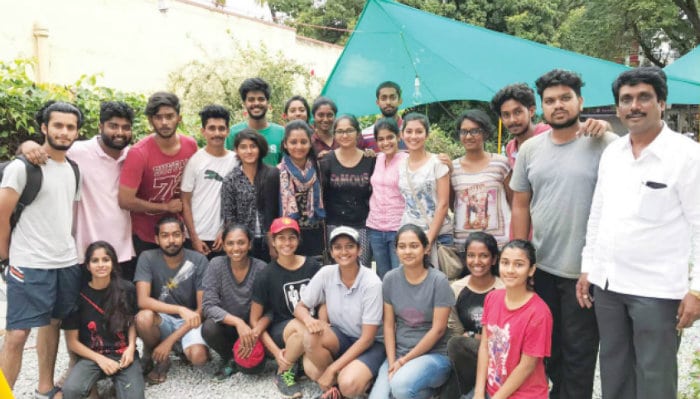 The students, who observed this, approached the area Corporator S.B.M. Manju and requested him to give them a chance to convert this ugly lane into a model conservancy. Responding to the request, Manju on obtaining approval from Corporation Commissioner has joined hands with them to convert it into a beautiful garden.

Dynamic students: Vishwajit leads the students of SPA in this noble cause. The other students include Allan, Raksha, Sneha, Pratheeksha, Arjun, Yoga, Abhiram, Tanusha and in all 30 of them have come together to set an example to others as to how even the most difficult of challenges can be overcome with dedication and hard work. The students while attending classes work from 5 pm to 9 pm and during holidays they work from morning 7 till evening 9.

Since planning and architecture is their subject, they are coming up with innovative ideas to convert a conservancy with dense growth of vegetation into a beckoning garden. They are using only waste and discarded materials. Thus, they are proving that by spending very little money even the worst looking place could be transformed into a welcome place.

As soon as one enters the garden, one would be welcomed with flowers planted in coconut shell pots. Strings have been tied to help the growth of creepers. Granite chips, jelly stones and other construction materials lying waste are being used to give the garden a modern, breezy look. In the middle, a beautiful circle in the form of a fountain is taking shape. About 10 stone benches will be installed so that the morning and evening walkers can sit on them and relax. The students are also planning a beautiful walkway. The compounds abutting the conservancy are being transformed with bright coloured paints and the paintings of yogasanas in different postures showcases the skill of the budding architects. The banner carrying the message, “Do not urinate here,” and “Do not litter here,” alerts everyone.

Speaking to Star of Mysore, Corporator Manju said, “In my own ward there are 15 such conservancies which have been converted into urinals. Added to that with the wild growth of bushes, it has become a haven for snakes and scorpions. I   receive lot of complaints from people in the locality about this. At this juncture the SPA students came to me and I was delighted with their initiative,” and added, “Since the last 25 days, the SPA students are displaying a lot of creativity and serving the society.”

Mayor M.J. Ravikumar, Corporation Commissioner G. Jagadeesha, the ward engineer and the public have all cooperated in this inspiring idea. It is just not the responsibility of the Corporators and Pourakarmikas to maintain the cleanliness of the city. Along with them if the NGOs, students and volunteers join hands, Mysuru could even regain the top spot for cleanliness in the country, said Manju.

SPA student Vishwajit speaking said, “The place was very unhygienic and unwieldy with full of bushes and wild growth. Hence, we had to make a lot of effort to clean the conservancy and each one of my boys and girls are working hard to transform this place and make it a model for others to follow. S.B.M. Manju cooperated with us by getting a JCB to clear the growth. Within a week the public can use this space.”

Two-and-a-half-years ago Let’s Do It! Mysore, an NGO had involved itself in clearing this place. A stone bench was also installed in front of Namaste building. As time passed, the public started neglecting the place and it returned to its original state.  However, the efforts of SPA students must be lauded for creating a garden here and helping maintain cleanliness.