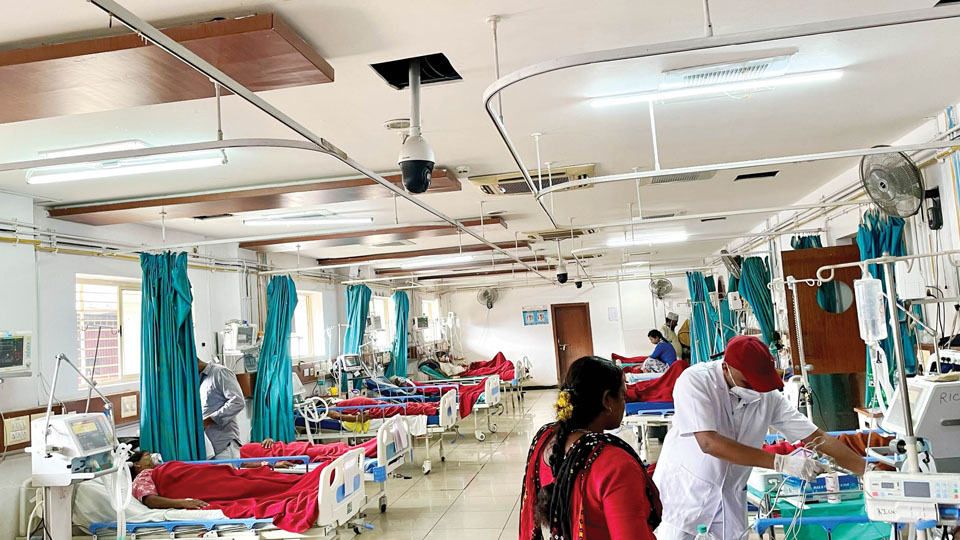 Mysuru: Chief Minister Basavaraj Bommai will launch a 10-Bed-ICU initiative where ICUs with 10 beds have been set up at K.R. Hospital in Mysuru along with 41 10-Bed-ICU wards in Government hospitals across the State tomorrow. Minister of Health and Family Welfare and Medical Education Dr. K Sudhakar will be present.

The 10-Bed-ICU (10BedICU.org) is a PPP (Private-Public-Partnership) project between the State Government and a group of NGOs. The goal of the 10-Bed-ICU project is to cover every district in India with at least one 10-Bed-ICU facility.

The initiative was launched in response to the second wave of the COVID-19 pandemic and the goal is to cover every rural district in India with at least one 10-Bed-ICU facility. In response to the acute shortage of medical staff, the initiative rolls out a Tele-ICU concept with 24/7 clinical support provided by experienced critical care specialists.

The project works in close partnership with State Governments. It purchases the ICU equipment and then donates it to the States which provide the space for setting up ICU facilities in existing public hospitals, as well as electricity, oxygen, medical supplies, nurses, physicians, and technicians needed to get the units working. Each 10-Bed-ICU unit comes with the latest medical equipment that includes devices like infusion pumps, syringe pumps, multi channel monitors, defibrillators or oxygen concentrators. Furthermore, there are at least two ventilators planned for each ICU.

A Memorandum of Understanding (MoU) was signed between the Government of Karnataka and Karuna Trust on Sept. 15, 2021 and a project management unit was setup with Principal Secretary T.K. Anil Kumar. The 41 10-Bed-ICUs were funded by CryptoRelief, GiveIndia, HDFC Bank Parivarthan and the 10-Bed-ICU and Tele-ICU Hub at K.R. Hospital was funded by Srikanth Nadhamuni, co-founder of the initiative.