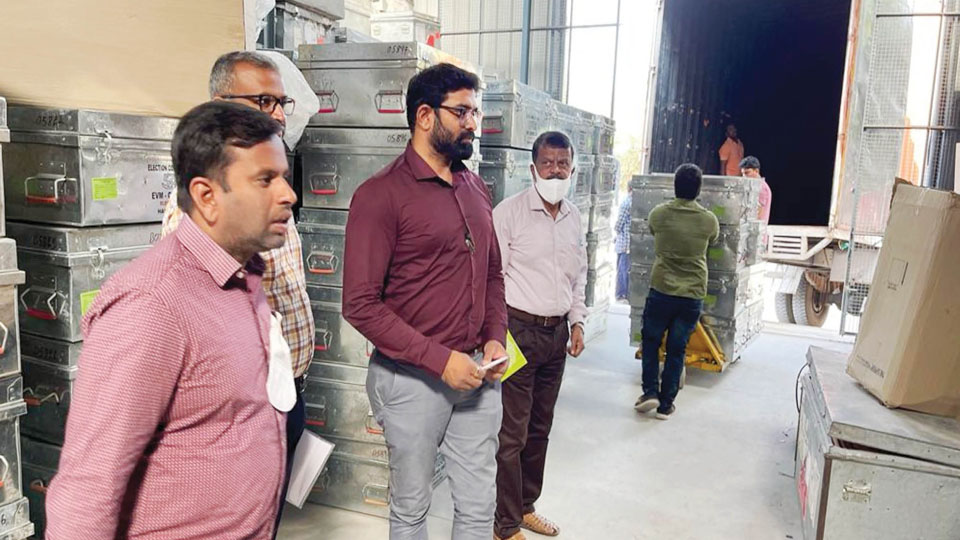 Mysuru: Things are falling in place to equip the Election Commission of India’s newly-constructed Electronic Voting Machine (EVM) Warehouse that was recently inaugurated in city near the new Deputy Commissioner’s Office at Siddarthanagar.

A team of officers and staff  are in transit from Hyderabad under the leadership of Mysuru District EVM and VVPAT (Voter Verified Paper Audit Trails) Nodal Officer G.T. Dinesh Kumar, who is also the Commissioner of Mysuru Urban Development Authority (MUDA).

The 20-member team is assisting him to bring the Electronic Voting Machines (EVMs), Control Units and Ballot Units that have been assigned to Mysuru and its Assembly Segments and the Parliamentary seat.

The project aims to establish a transparent electoral system. It institutionalises democracy and builds capacity for sustainable management of information technology. The highly-secured EVM Warehouse is a dedicated facility and has been built keeping in mind the measures to be taken to protect EVMs, Control and Ballot Units and VVPATs. It will help maintain transparency during the counting of votes.

Machines inside the EVM Warehouse will be stored as per the Assembly Constituencies in Mysuru and there are dedicated rooms for that. “MLAs and MPs of the Mysuru region have been informed about the arrival of the electronic machines from Hyderabad and they can come and see the unloading and the storage process. They can send their representatives also,” Dinesh Kumar said.

Due to the lack of an EVM Warehouse earlier, there was a problem with storing EVM and other equipment after the Lok Sabha, Vidhana Sabha, Municipal Council and Panchayat elections. Till now, these election-aiding equipment were being kept at Government buildings including colleges. There was a need to set up strong rooms for their safety until the vote counting was done.

The EVM Warehouse will provide a permanent solution for the storage of election-related material. These will be mobilised only during the elections. The Warehouse has strong room facilities and it will be equipped with CCTV cameras, fire extinguishers and emergency alarms. It has separated counting sections and more facilities will be added including the approach road later, said H.B. Satish, Project Director, Nirmithi Kendra.