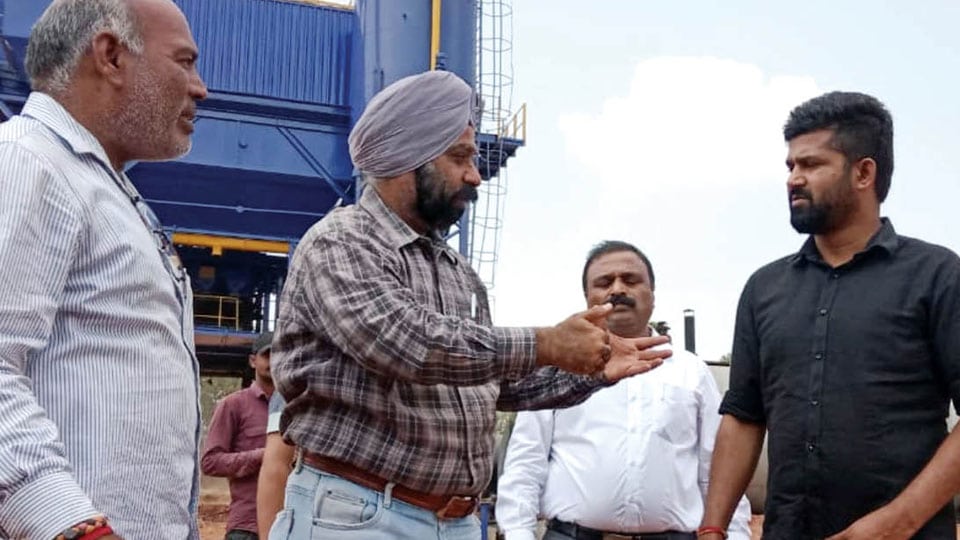 Mysuru: Mysuru-Kodagu MP Pratap Simha this morning inspected the works on widening the existing four-lane 118-kilometre Highway between Mysuru and Bengaluru to a ten-lane (including 2 service roads) National Highway (NH). He took stock of the works at Gananguru village in Srirangapatna taluk in   Mandya district.

Speaking to reporters, the MP said that National Highway Authority of India (NHAI) has awarded the project to Bhopal-based Dilip Buildcon and the estimated cost of the project is Rs. 6,500 crore. The project is fully funded by the Centre including the distribution of compensation for the land acquired.

The NHAI has set the set a deadline of 36 months for completion of the works and the project implementing company has promised to finish the works by 24 months, he added. The scope of the work also includes construction of nine major bridges, 44 minor bridges and four Road Over Bridges.

The Company has taken up the highway works in two packages. The first package covers the development of 56.1 kms highway stretch from Bengaluru to Nidaghatta in Maddur taluk at the cost of Rs. 3,000 crore including 900 acres of land acquisition. Over 80 per cent land acquisition has been completed.

The second package of works includes the development of 61.2 km highway from Nidaghatta to Mysuru at the cost of Rs.3,500 crore. Over 1,121 acres of land will be acquired for the second package works and 60 percent of land has been acquired, he added.

Pratap Simha said that implementing company has simultaneously taken up both the package works after setting base camps for every 20 kilometres. The road works were taken up as part of initiatives of Prime Minister Narendra Modi who had promised for improvement of connectivity between Mysuru and Bengaluru when he held the election rally in Mysuru on April 8, 2014. Modi has also kept his promise of completing railway doubling tracks works and air connectivity from Mysuru, he said.

An estimated 36,000 vehicles ply between the two cities everyday and traffic density has increased the duration of travel. Once the highway project is completed, the commute time between the two cities is expected to reduce to 90 minutes, he said. NHAI Superintending Engineer and Project Director Sridhar and others   were present.