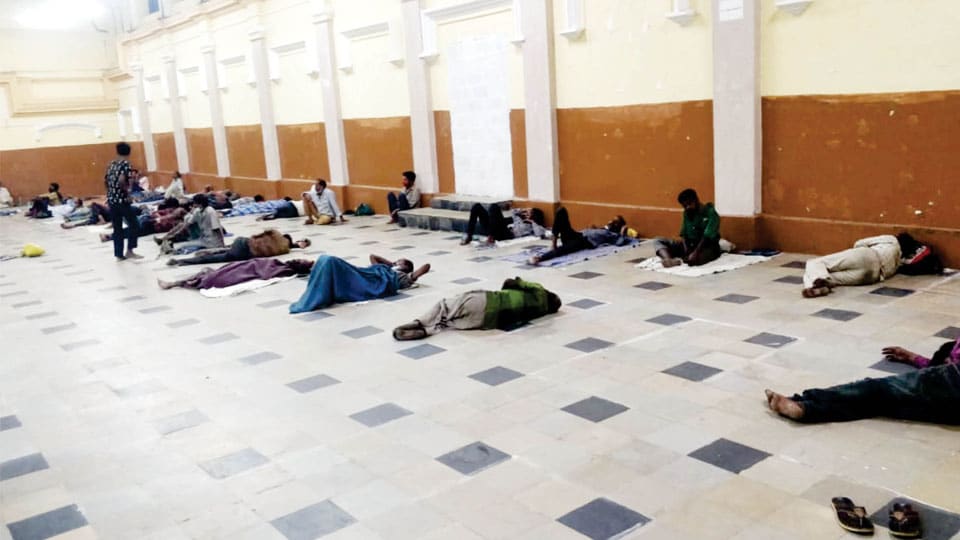 Mysore/Mysuru: The Mysuru City Corporation (MCC) has set up a shelter home for the homeless and the poor who have been affected by Janata Curfew and subsequent lockdown to curb the spread of Coronavirus.

Last year, after nationwide lockdown, MCC had established the shelter at the same venue.

The temporary shelter has come up at the Nanjaraja Bahadur Choultry on Vinoba Road in city to help the distraught orphans, destitute and others in need of aid. Following orders issued by MCC Commissioner Shilpa Nag, 104 destitute and the homeless, who were living on the footpaths opposite KR Hospital and near City Railway Station were shifted and given shelter at Nanjaraja Bahadur Choultry yesterday night. MCC will be providing them food and other facilities.

As soon as they were shifted to Nanjaraja Bahadur Choultry, MCC conducted Rapid Antigen Test for all symptomatic inmates. Five inmates including a woman were found to be positive. All five patients were later admitted to Mandakalli COVID Care Centre. Each asymptomatic homeless person have now undergone RT-PCR test. The results will be out by tonight or tomorrow.

Yesterday, a donor had volunteered to provide breakfast while Rotary Club distributed lunch and dinner for all the inmates. Many organisations have come forward to donate bed sheets and other daily use items. All 104 persons have been advised to maintain social distancing and wear masks.

MCC has identified 20 homeless persons this morning who will be undergoing RT-PCR test and later sheltered in Town Hall or other care centres in city.

Four persons from a family, hailing from Hosakote, have now been provided shelter here at NR Choultry. According to reports, the family who were on a visit to Mysuru could not return to their native village due to lack of transport facilities and hence were living on the footpath near Railway Station. All four family members comprising husband, wife and two children now have been given shelter at this facility.

Nodal Officer Shivappa has been deployed for shelter home care while MCC Assistant Commissioner Manjunath and AEE Mruthyunjaya will be managing the centre. Cleanliness and sanitation of the centre will be monitored by Health Inspector Rajeshwari.

COVID-19 Mysuru City Corporation Nanjaraja Bahadur Choultry
Shops open only on Monday and Friday in Kodagu
KSCA should come to the rescue of sportspersons: MLC