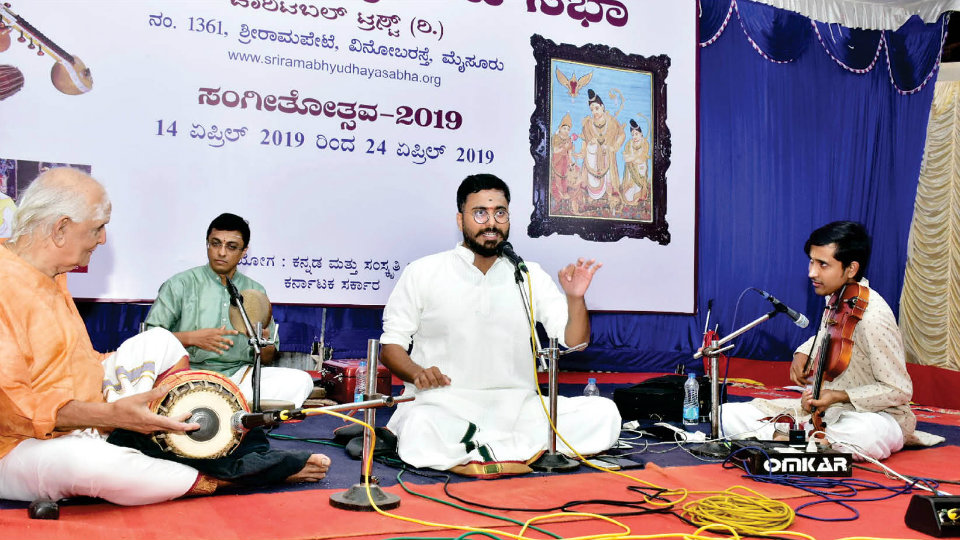 Running a Music Sabha for more than a century is not easy. Kudos to Dr. N. Sriram of Sri Ramabhyudaya Sabha, who, keeping with the tradition and carrying the legacy,  has completed 128 years of Ramotsava celebrations and is conducting the 129th Ramotsava this year. The Sabha has been organising music festivals during Ramanavami and for the past five years the venue is shifted to Alamma’s Choultry close to the temple to accommodate more people as the Moole Ramamandira was falling short of space.

The first day of this year’s series showcased Vid. Bharath Sundar’s vocal concert with Vittal Rangan on violin, Umayalapuram  K. Sivaraman on mridanga and Guruprasanna on khanjira on Apr. 14. Trained under P.S. Narayanaswamy, Bharath has moulded himself into a leading vocalist today. He is not blessed with a melodious voice but has trained it so well that one forgets it within a short time after the commencement of the concert.

Bharath gave a lively start to the concert with the Begade Varna ‘Inta chalamu’ set to Adi TALa composed by Veena Kuppaiyer. ‘Neekela Dayaradu’ by Ramaswami Shivan in Sarasangi is a rare composition which suited the occasion. Neraval at the beginning of the charana part ‘Neratata Bhuvimeeda’ was well knit. ‘Shreekanta Enagishtu Daya Mado tande’ by Purandara Dasa was a pleasant surprise, especially because of the rare raga in which it was set to music – Sriranjani, unlike Kanada in which it is normally sung.

Jaganmohini was rendered beautifully and quite in detail and the listener was surprised to see that the raga had so much to offer. Vittal Rangan’s version of the raga was equally brilliant. Tyagaraja’s ‘Shobhillu Saptaswara’ also saw a lively neraval at ‘Dhara hrtsaamaadulalo’ with variety of sangatis for ‘Saamaadulalo’ with swaraksharas.

Bharath chose Harikambhoji for detailed rendition. The raga essay was extensive and indicated the composition many a time during the essay. ‘Dinamani Vamsha tilaka laavanya’ by Tyagaraja in Adi Vilamba was rendered with dignity. Sivaraman not only encouraged the young vocalist throughout but also played for Vittal Rangan, while the normal practice is that the ghatam or khanjira artiste plays for the violinist. Swaras were developed for the pallavi after which it was the Tani time. The audience maintained pin drop silence to hear the senior mridangist play. Sivaraman and Guruprasanna together offered a very vibrant taniyavartanam for more than 25 minutes.