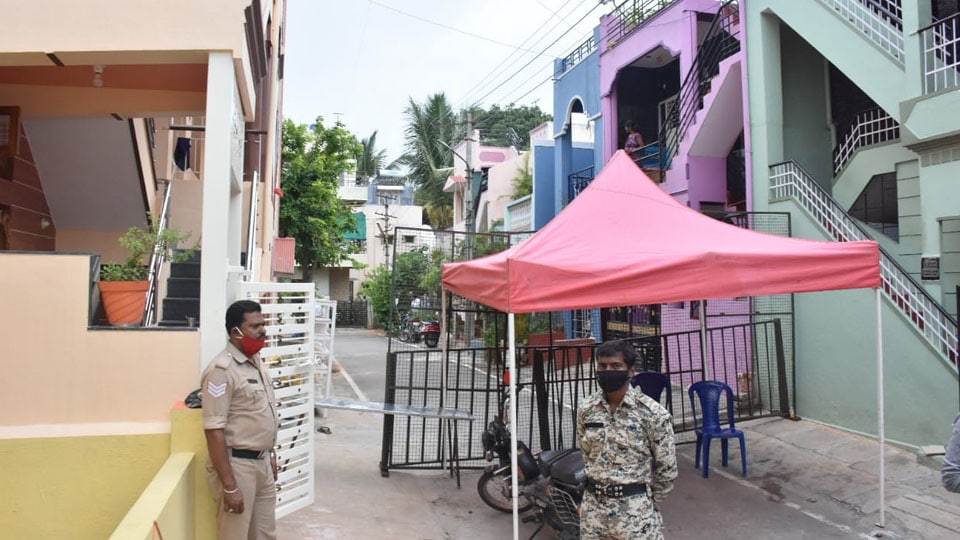 Mysore/Mysuru: In view of 22 positive cases reported yesterday and the total number of positive cases reaching 220, the Mysuru District Administration has declared 16 Containment Zones across the district.

The State Government has now tweaked the criteria and definition of Containment Zones. While it was initially 100 metres for individual houses where a positive case was reported, it is now a smaller area. The authorities are no longer declaring an entire Municipal Ward as a Containment Zone. Instead, the public health authorities only seal a house or apartment where a COVID-19-positive patient is found.

In early April, Containment Zones extended to 5 kms from the house where a positive case was found. An intensive buffer zone of 1 km was marked out for house-to-house screening. This reduced to 1 km, 200 mts and 100 mts over time.

In the wake of a positive case in an apartment block, instead of containing the entire block, the particular floor and the floors above and below are cordoned off. In the case of a standalone house segregated with walls or fencing, the house alone is contained.

Following many Karnataka State Reserve Police (KSRP) personnel testing positive in Jockey Quarters in city, all the Policemen and their families are demanding COVID test from authorities. A team of 24 KSRP Policemen had been to Padarayanapura in Bengaluru on duty and most of them and a few of their contacts tested positive for the disease.

This morning, a team of health officials had been to Jockey Quarters to random check Policemen if they have symptoms of cold, fever and breathlessness. Hearing about the tests, many Police personnel came to the testing venue as early as 7 am and sought mass testing.

The Policemen demanded that as many of their colleagues tested positive, the District Administration must subject everyone inside the Jockey Quarters premises for COVID tests. They told the health personnel that every day they were living in a state of fear and anxiousness as their duty-bound colleagues have tested positive for the virus.

The Policemen requested them for mass testing to ward off fear in the area. The Health Department officials, however, clarified that they only have instructions to test people who had symptoms. The Policemen were asked to contact their higher officers for mass testing.

In a major relief to the Mysuru District Police, all the 58 Policemen, who were primary and secondary contacts of the Policeman from Nanjangud Rural Police Station who had tested positive, have now tested negative. This was disclosed by Mysuru Superintendent of Police (SP) C.B. Ryshyanth this morning.

The Policemen, who were investigating the case of 50 missing .303 bullets from T. Narasipur Police Station, had come into contact with the Nanjangud Rural Policeman who had tested positive. As a result, all the Policemen including the SP and Inspector General of Police (IGP), Southern Range, were under quarantine and their swab samples were sent for tests.

Ryshyanth told the media that all the samples of 58 Policemen tested negative and as such, the Policemen and the Department can breathe easy now.

Officials ask contacts of person infected with COVID-19 to register

Mysuru, June 26- A person residing at a house behind the Military Quarters in Hebbal has been tested positive for COVID-19 on June 23.

As the person had roamed about in the locality for purchase of essentials between June 18 and 23, the District Administration has asked all those people who were in contact with the person for the past 15 days to report and register themselves with the DC Control Room No.0821-2423800 or call Helpline 1077, as a health and safety measure, according to a press release.