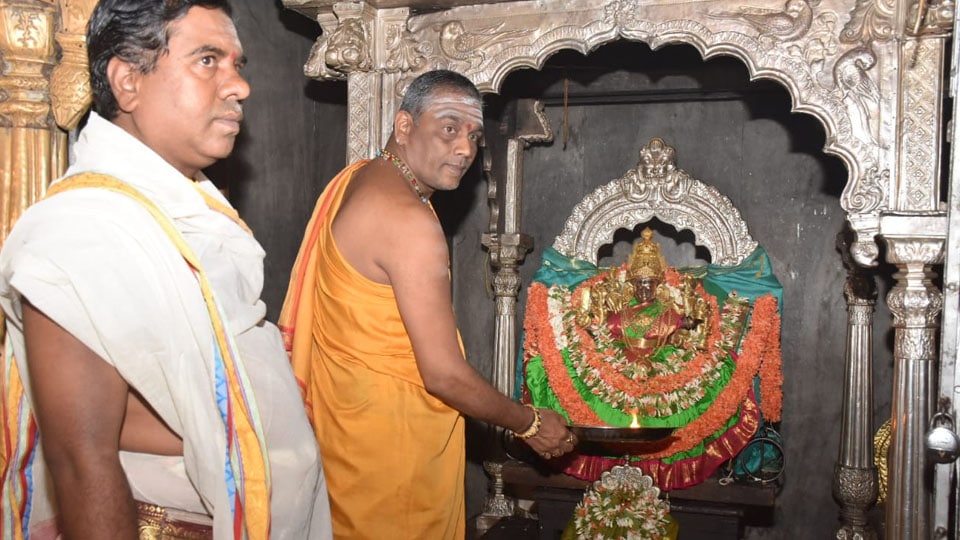 Mysore/Mysuru: For the first time in more than 100 years, the Sri Chamundeshwari Temple atop the Chamundi Hill was closed today for devotees on the first Ashada Shukravara (Friday). Traditional rituals were performed to the presiding deity this morning amidst Police and priest presence but there was only a handful of them.

The hallmark of Ashada Shukravara is the surging crowds starting from 3 am till late into the night. Lakhs of people congregate at the Temple during the auspicious Ashada month and on each Ashada Friday, there will be crowd numbering more than 50,000. Today, there were only around 30 people in the temple premises including the priests.

Ashada, considered inauspicious for celebrating any functions like weddings, house-warming, Upanayana, Aksharabhyasa is, however, considered most auspicious for worshipping Gods and Goddesses. The reigning deity of the city Goddess Chamundeshwari is the most appealing deity and as a result, lakhs of people throng the Hill Temple during Ashada Shukravara.

Every year, the Mysuru District Administration, the Temple authorities and the Police rise to the occasion and fully gear up for the preparation to make it smooth for the devotees to have darshan of the Goddess. This year, however, due to COVID-19 pandemic, the Administration banned public entry fearing community spread of the virus.

Even in the next Ashada Shukravara that will fall on July 3, 10 and 17 and also on the day of Vardhanti (Goddess Chamundeshwari’s birthday on July 13), entry of devotees will be banned.

With COVID cloud hovering over the celebrations, the Temple doors were opened at 4.30 am today and rituals were conducted under the leadership of ‘Pradhana Agamika’ (chief priest) Dr. N. Shashishekar Dikshit and ‘Agamika’ Deviprasad. Rituals like Mahanyasa Poorvaka Abhisheka, Rudrabhisheka and Archane were performed along with Mahamangalarathi. Today, the Goddess was decorated as ‘Nagalakshmi.’ The temple doors were closed at 7.45 am after the traditional armed salute by the Police.

According to Shashishekar Dikshit, devotees were not allowed to the Temple during Ashada month a century ago or 120 years back due to the outbreak of the Bubonic Plague in Mysuru. “My grandfather used to narrate tales about how the Temple – in Ashada month — was closed during plague and cholera. Today it is closed due to COVID-19. I request all the devotees to pray at home,” he said.

All the four entrances to the Chamundi Hill were closed today and even the entrance through steps was closed as barricades were laid. Policemen were posted to prevent the entry of people.

DCP Dr. A.N. Prakash Gowda supervised the arrangements. Speaking to reporters, he said that the entry of devotees will be banned on all Ashada Fridays and on Vardhanti Day but rituals will continue.

ONE COMMENT ON THIS POST To “First Ashada Friday at Chamundi Hill: Rituals held but Temple closed for devotees”