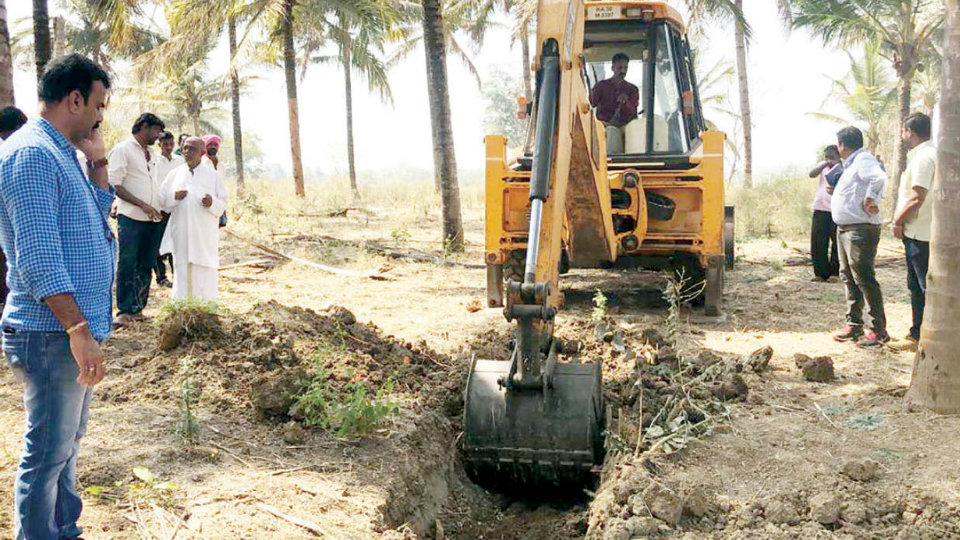 Mysuru: The Mysuru District Administration on Jan. 23 reclaimed 25 acres of lake land that had been encroached upon by farmers at Vadakanakatte between Maddur and Kallahalli at Jayapura Hobli in Mysuru taluk.

The land, spread on different survey numbers, had been originally allotted to the Irrigation Department to build a lake several years ago.

The operation was led by Tahsildar T. Ramesh Babu who said that following a series of complaints received in the past one year, an encroachment clearance drive was conducted and 25 acres of land that was being used for agriculture purpose was reclaimed.

About 15 farmers had encroached upon the lake area, with some of them developing a coconut farm.

The farmers had encroached the land and had distributed among themselves and they had opposed the District Administration’s move to re-acquire the land, the Tahsildar added.

The drive was conducted amidst tight security cover with 50 Police personnel deputed for the purpose. The reclaimed land was later handed over to the department. In all, 50 acres of land had been acquired by the government several years ago and a part of the area — 25 acres — had been allotted to the department way back in 1960, he said.

Ramesh Babu said that the administration has planned to recover all the lake lands that have been encroached in the district and the drive will be completed by the end of February. More than 10 encroachments have been identified and the department has realised that over 30 acres of lake land have been illegally occupied and they will be cleared before the poll conduct for the Lok Sabha polls is announced, he added.