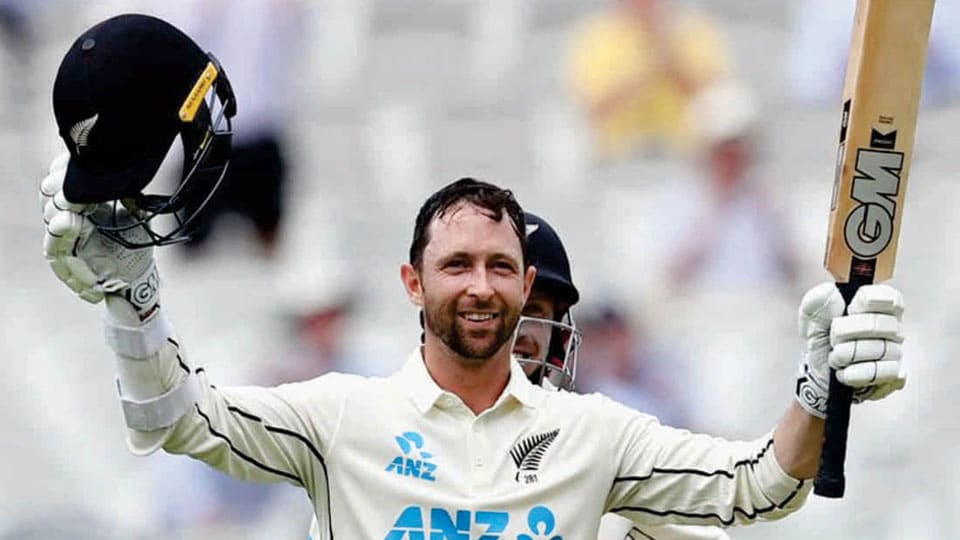 Sparse crowd from young to octo-genarians rose to their feet as Devon Conway hooked a shoulder high bouncer from Mark Wood into the stands for a six to go from 194 to 200 — and ‘On Debut’ — the only cricketer in the history of world cricket to have scripted a double hundred on debut at the Mecca of Cricket — The Lord’s.

In nearly 5 sessions of 1st inning of 1st Test between England and New Zealand, Devon Conway exhibited exemplary temperament during the historic knock with calm demeanour stroking the balls on merits while all the pacers of England — Anderson, Broad, Wood and the debutant Ollie Robinson — bowled exceptionally well. The Test ended in a tame draw.

Weather in London was beautiful; around 20 degrees Celsius. 3rd day was totally lost on account of mild showers. Outfield looked lush green. The 22 yards had inconsistent bounce; not reminiscent of the track. Keepers B.J. Watling and James Bracey had tough times behind the stumps.

Watching cricket at the Lord’s is always a pleasure. The majestic venue that opened in the year 1814 will soon be completing 200 years of glory. Named after Thomos Lord, the owner of Marylebone Cricket Club (MCC), it has undergone constant up-gradation over the decades. Beautifully curated lush green outfield with a pavilion built of ‘Lime Stone’ blocks, inaugurated in 1890, looks imposing. Media Box/ Centre, a beautiful oblong structure, at the ‘Nursery End’ inaugurated in 1999 bears modern architecture — a luxurious space for the media. Currently, the media centre is flanked on either side by the recently completed ‘Compton Stand’ and ‘Edrich Stand’ with impressive architecture. Adjoining the pavilion, a new block has been added. Roof structure is designed using ‘Oak Wood’ and translucent fabric cover that facilitate nice sunshine and breeze. Steep stands in the newly built stands ensure brilliant visibility to the spectators. Name of J.P. Morgan is splashed all over — apparently as the major sponsor of up-gradation works.

My memory serving me right, the architecture of the ‘Media Centre’ is replicated only at two other venues in the world. At the Saurashtra Cricket Association, Rajkot, India and at the Kensington Oval, Barbados, West Indies.

The British historically love ‘Brilliant White’ associated with sports. Compton and Edrich stands and the stands at the eastern and western sections/ zones are furnished with seats in brilliant white colour — uniform all over. Picket fencing along the boundary in brilliant white colour looks a stunning contrast to the lush green outfield — all adding to the beauty of the venue that has 30,000-plus capacity currently.

To score a 100 on debut at this magnificent and historic venue is a tag in golden letters attached to the names for life and beyond. It is also relevant to mention here of another debutant of the English, Ollie Richardson, who exhibited exceptional cricketing talents. He picked up 4 wickets for 75 in the 1st and 3 for 26 in the 2nd innings. He also scored a competent 42. It was unfortunate, however, to learn that the youngster had indulged in ‘Racist and Sexiest’ tweets. He has been suspended from Intl. Cricket until further notice by ICC.

In the scenario, we as proud Indians recall the magnificent hundred on debut by our ‘Prince of Kolkata’ Ganguly in 1996. At the same time, we feel sorry for ‘The Wall’ Dravid to have missed out the glory by a whisker. And, that’s cricket.