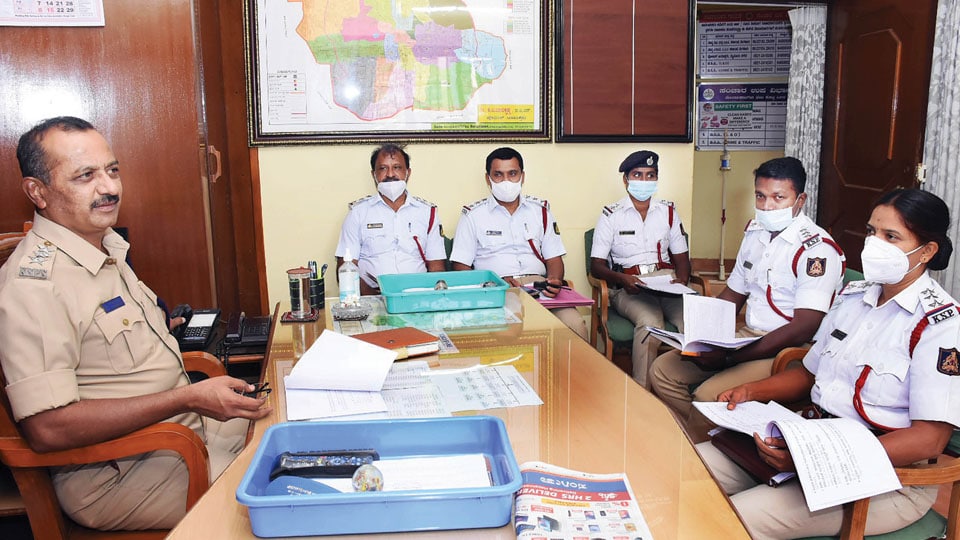 Mysore/Mysuru: The  55-hour-long second weekend curfew announced by the State Government early this month in the wake of rapidly surging COVID cases will commence from 10 pm tonight. The curfew will end at 5 am on Monday (Jan.17).

The district authorities and the Police have begun preparations for enforcement of the weekend curfew, in right earnest. Though shop-owners of non-essential commodities and services have got adjusted to weekend curfew,  the traders are finding it inevitable to stand with the Government for  checking the spread of the virus, which has raised its ugly head for the third time in two years since its outbreak in March 2020.

With the commencement of  the second weekend curfew just hours away, boozers were seen lining up before liquor shops across the city for making liquor purchases that could last for them till the end of the 55-hour curfew.

As in the past, shops selling essential commodities and essential service providers  such as medical shops, diagnostic centres, hospitals, ration and provision stores, fruits and vegetable shops, petrol bunks, hardware shops and the like will remain open. Though there is no regulation for Road and Rail transport and other public transport services, they are required to strictly comply with the Government protocol.

Hotels, restaurants, bakeries and other shops selling food items are allowed to open, but with restrictions. There will be no dine-in facility and they can provide only parcel services.

Cinema halls, clubs, pubs, gyms, swimming pools, parks, temples and other places of worship, tourist spots and such other public gathering places, will be shut during the weekend.

As regards Kalyana Mantaps and Function Halls are concerned, only 100 people will be allowed inside halls and 200 people in the precincts. Emergency services like ambulance and other health contingency vehicles are allowed to travel freely.

With the curfew starting at 10 pm, Police will start making public announcements at 9.30 pm today asking shop-owners to shut down.

Traffic ACP S.E. Gangadharaswamy held a meeting with Traffic Police Inspectors and other personnel at his office on Vinoba Road here this morning.

The meeting, apart from discussing strict enforcement of weekend curfew, also deliberated on speedy disposal of  seized vehicles as per a Court order, through public  auction.

These vehicles which were seized for various traffic violations, are lying in Traffic Police Stations for long with no one claiming ownership of such vehicles or produce documents.