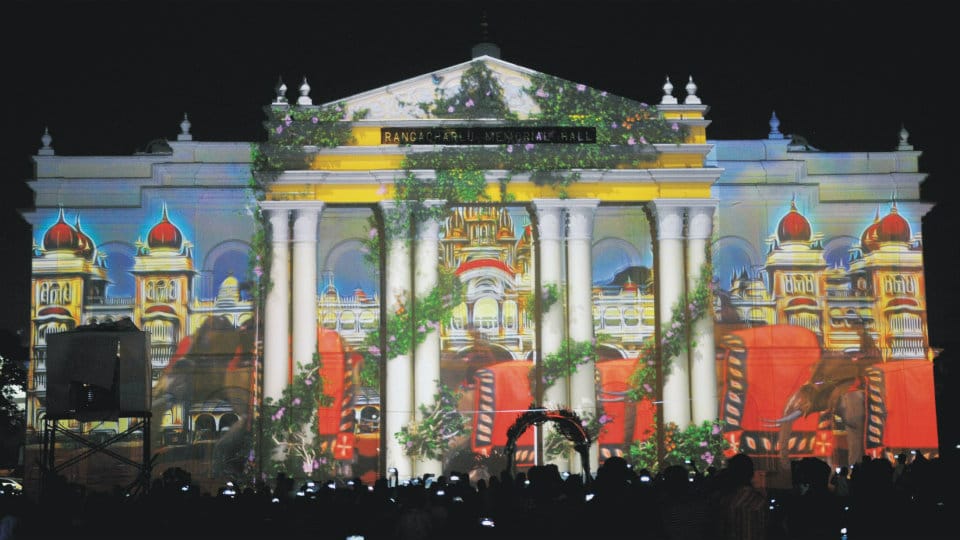 Mysuru: As the Dasara celebrations draws to a close and people are eagerly looking forward to Ayudha Puja and the world-famous Dasara procession, there is one more attraction introduced by the District Administration and the Tourism Department that Mysureans and the tourists thronging the city cannot afford to miss. It is the 3-D projection mapping on the 133-year-old Town Hall that captures the history, pomp, pageantry of the 400-year-old Dasara celebrations right up to the present, showcasing the many achievements of the present State Government.

The Town Hall comes alive as the show opens with a very meaningful recreation of the speech of an All India Radio broadcast in 1938 by Sir Mirza Ismail, who served as the Dewan under Rajarshi Nalwadi Krishnaraja Wadiyar and this is the text.

This aptly sums up the contribution of the Wadiyars to the State of Karnataka. Delving into mythology where the Demon King Mahishasura was annihilated by Goddess Chamundeshwari and how the beautiful backdrop to Mysuru City, the Chamundi Hill has been revered as a seat of immense religious power, the story of the Dasara unfolds.

The ten-minute presentation in Kannada and English richly captures the imagination of the people as to how the Vijayanagar kings began the Dasara festivities and how it was carried forward by Raja Wadiyar in 1610 in Srirangapatna. The doll exhibition fills the huge Town Hall front and as the elephants march behind the gothic pillars of Town Hall as part of Gajapyana, the audience erupt in joy.

The show also shows the importance given by Chamaraja Wadiyar to women’s education and how Nalwadi Krishnaraja Wadiyar supported the establishment of Kannada Sahitya Parishat through Sir M. Visvesveraya. The importance of yoga and how it was popularised by yoga guru Tirumalai Krishnamacharya in the asthan of Nalwadi has also been highlighted.

Another highlight is Dewan Rangacharlu establishing the first Representative Assembly in the country in Mysore at Jaganmohan Palace. And, the moment this is announced, the whole Town Hall premises  gains a halo as the light and sound magic majestically throws light on the inscription Dewan Rangacharlu which the Town Hall carries.

The show ends with the current theme of Dasara — Constitution, Democracy and Equality and finally the fireworks explodes thus drawing curtain on the ten-minute show.

The show is presented by Studio Trika, Bengaluru and is live streamed on Facebook by masthmysore.com.