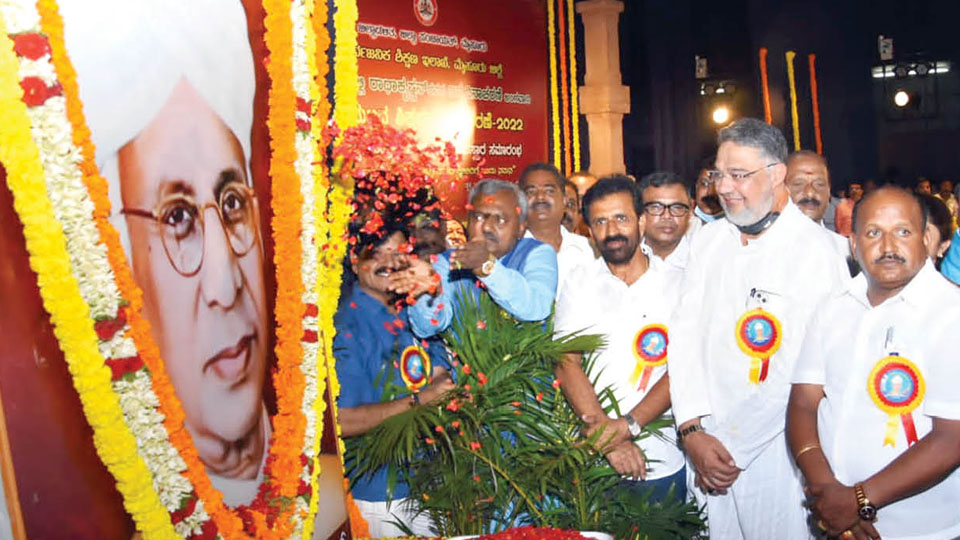 Mysore/Mysuru: A total of 30 teachers were conferred District-level Best Teacher Award at the Teachers Day celebration organised by the District Administration in association with Zilla Panchayat and Department of Public Instruction, at Kalamandira on Hunsur Road here this morning.

The programme, which was supposed to begin at 10 am, began two hours late.

District Minister S.T. Somashekar conferred the awards to 30 teachers (ten each from Primary, Higher Primary and High School sections) from the District and felicitated them.

The speakers said that Teachers Day is being celebrated marking the birth anniversary of Dr. Sarvepalli Radhakrishnan, former President of India and a great scholar, teacher and philosopher. The Day is dedicated to the teaching fraternity and celebrated in recognition of the works of educators, including teachers, researchers and professors, they added.

The Teachers Association office-bearers presented a memorandum to the District Minister complaining that teachers were more used for non-academic purposes. Maintaining that the service of teachers are more utilised for purposes other than that of the Education Department, they asserted that this has hurt the academics in schools, resulting in poor exam results. Arguing that the services of NGOs which are many in number can be engaged for outdoor duties such as conduct of survey, census, collection of data etc., the Association demanded that the teachers be kept out from such duties. Leaving the teachers for just doing teaching and other Education Department activities, will hugely help in academics and achievement of better results, they further said.

After receiving the memorandum, Somashekar said that Chief Minister Basavaraj Bommai will be coming to the city tomorrow, during which he will forward the memorandum to him and discuss the issue.