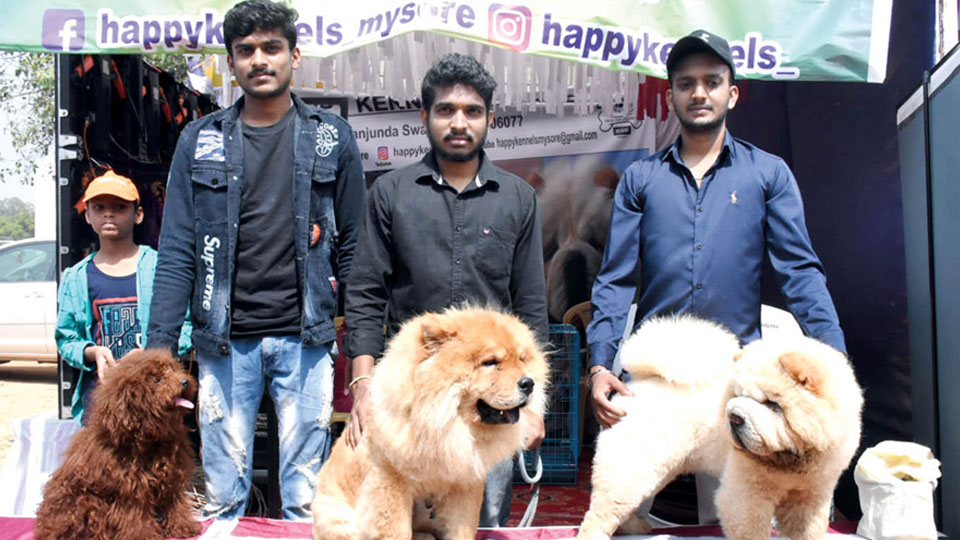 Mysore/Mysuru: The 9th and 10th All India Championship Dog Show and 9th Show of Society for Indian Breeds of Dogs was organised by the Canine Club of Mysore, affiliated to Kennel Club of India) at Bharat Scouts & Guides Grounds, near the DC’s Office this morning The show saw the participation of 434 dogs and there were many dogs who were brought to the venue just for the fun of it. Participants included those from Bengaluru, Mysuru, Ooty, Kodagu, Kerala, Andhra Pradesh, Chennai and other places in Karnataka and Tamil Nadu.

Competitions are being held under different categories and interestingly, the dogs were brought from outstation destinations in huge vehicles like Tempo Travellers, Winger and SUVs complete with air-conditioning facility and also cooling systems like ice cubes, fans and suitable food.

The Canine Club of Mysore had not organised the show since the last two years due to the COVID pandemic and according to Club President B.P. Manjunath, in 2019, the show attracted 230 entries and this time the number had gone up to 434, indicating the popularity of the show.

All the pets participating in the competition were microchipped and had documents pertaining to three generations as insisted by the organisers. Dogs were also sprayed with water every now and then to keep them cool.

Veterinary pharmaceutical companies and companies manufacturing pet foods, healthcare products and accessories such as soaps, dog foods, belts, collars and other accessories like shampoo, chains, belts, leash etc. had put up stalls at the venue.

The event will culminate with prize distribution at 8 pm. C.V. Sudarshan from Chennai and T. Preetham and Yashodhara Hemachandra from Bengaluru are the judges. The top 9 dogs will be selected as ‘Best in Show.’