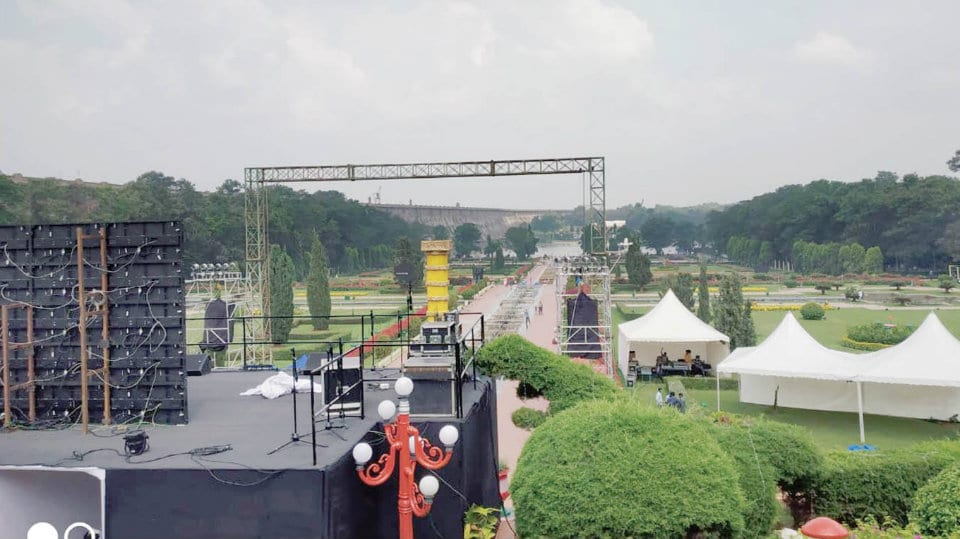 3D-lighting at KRS from today

Mysuru:  The Krishna Raja Sagar (KRS) Dam will come alive with 3D projection mapping and other special lighting arrangements for 9 days from this evening.

The Mandya District Administration and Cauvery Neeravari Nigam Limited (CNNL) have made this arrangement till Oct. 24, to attract tourists as lakhs of them flock the historic Nada Habba Dasara celebrations in Mysuru that culminates with the Jumboo Savari on Oct. 19.

The 3D mapping will be one of the major tourist attractions at KRS dam this year apart from other sight-seeing and cultural events.  This 3D mapping projection will entertain visitors for nine days but it will not be a permanent feature.

Earlier it was planned to project KRS with this special 3D mapping from Oct. 10 itself to coincide with the inauguration of Dasara festivities  in Mysuru but they could not implement owing to enforcement of model code of conduct due to bypoll in Mandya Parliamentary Constituency by the Election Commission of India (ECI).

Mandya District Administration had sought the ECI permission for 3D projection and to host other Dasara activities but it granted the permission only yesterday. The CNNL has awarded the contract of 3D projection mapping at KRS to Bengaluru-based DNA Entertainment Networks Pvt. Ltd., one of the international event management companies and it completed the work successfully.

This projection will bring KRS dam structure alive through video display just like the Sound and Light show. Recently, the CNNL had tried this technology of 3D mapping projection when the Dam reached its brim in the last week of July this year and a huge amount of water was discharged from the dam.  As the mapping received good response, the authorities want to cash in on it during this festive season too. Projection mapping, also known as video mapping, uses the dam and building structures for video display. During the 10-minute 3D mapping programme, a grand history of KRS will be showcased through audio and video projection for the visitors.

Speaking to Star of Mysore this morning, CNNL Executive Engineer Basavarajegowda said the projection mapping will surely draw a large number of people to KRS.  The special programme will be held from 6 pm to 8.30 pm near Cauvery Statue in Brindavan Gardens and it will be extended on weekends and other days if there is heavy rush to the dam site. Several television artistes will perform at the cultural events. 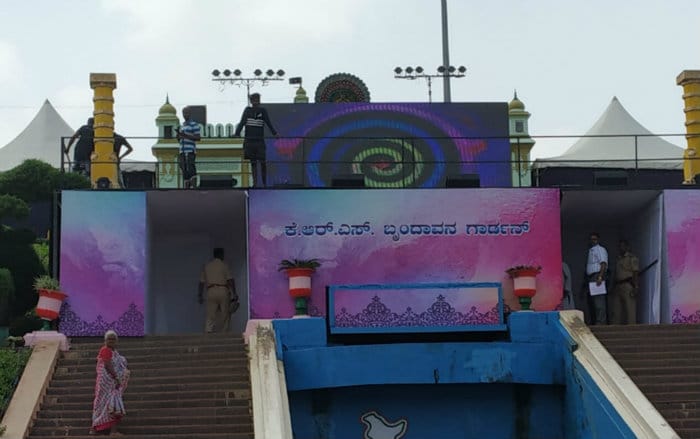 The CNNL has also made arrangements for display of the spectacle on big LED screens at 10 different locations of the Dam for the benefit of public.

CM to visit to KRS this evening

Chief Minister H.D. Kumaraswamy, who will be in Srirangapatna this afternoon to inaugurate Jumboo Savari as part of the three-day Srirangapatna Dasara, will be inspecting the 3D projection, illumination and other programmes hosted at KRS at 4.30 this evening, said Basavarajegowda  and clarified that the ECI had granted permission for CM only to inspect the site and not to make any political speeches or public announcements.

No changes in entry fee

There is no change in entry fee to the Dam. An entry fee of Rs.20 is fixed for adults and Rs. 5 for children.  A parking fee of Rs. 100 including the toll will be collected from each bus, Rs. 30 from car owners and Rs. 3 for two-wheelers.