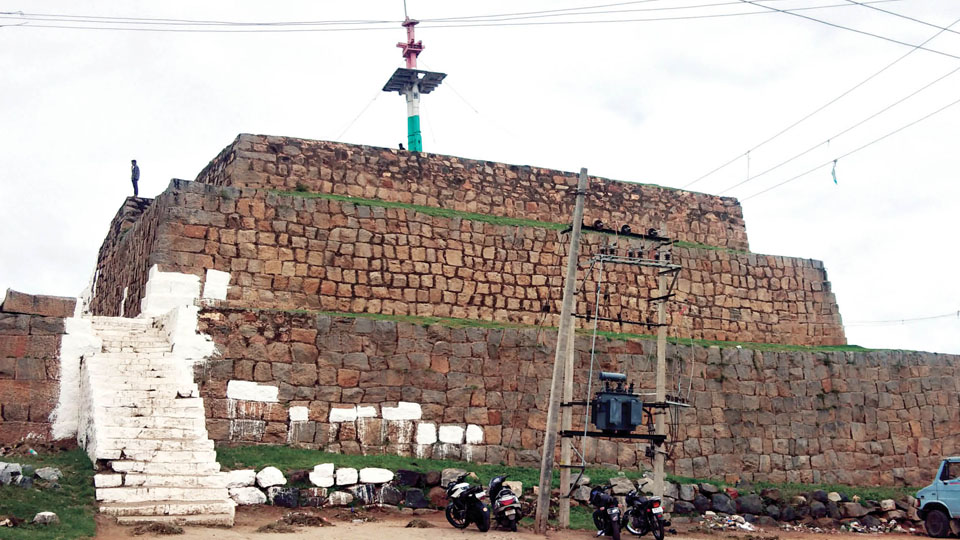 500-year-old Bateri in a shambles

Rajas, Sultans have hoisted Flags on this 15th century flagpole in Srirangapatna

The Rajas, Maharajas and Sultans right from 15th Century have proudly protected this historical monument where they were hoisting flags from this flagpole in Bateri, which unfortunately is in a shambles now.

This place classified as a heritage structure is very close to the Delhi Gate near the Srirangapatna Fort. This Bateri was built during the reign of Vijaynagar rulers in the 15th century, when Proudadevaraya (Second Devaraya) was ruling the kingdom. This place was built to hoist the flag with Varaha symbol.

It is really interesting that a place exclusively to hoist the flag with a solid iron pole, a flight of steep steps and a wooden platform, held by strong wires, had all been built nearly 500 years ago and it has lasted the vagaries of nature.

Tipu Sultan lost the battle to the British on May 4, 1799. Immediately, the British Officer Colonel Graham hoisted the British flag on the same day at Bateri. Even now, only the Srirangapatna Tahsildar hoists the National Flag. This is passed on from generations to retain the cultural identity of the place.

Bateri is built in the form of a square and it is 70 feet above the ground. In front, an idol of Veeranjaneya is placed. If one stands on Bateri then one has a panoramic view of Srirangapatna. But Bateri was not just a flag hoisting place.

The place was used as a watch tower right from the rule of Vijayanagar kings. History tells us that the moves of the enemies were watched from this tower and strategies planned for the war. Such a historic place is sadly lying in a state of neglect now.

Half of Bateri is being surrounded by houses. In the remaining portion, the locals smear it with cow dung cakes. This has completely altered the heritage significance of the place. Tourists, who visit Bateri, are irked by this sight.

Besides, a few of the residents allege that all kinds of illegal activities happen during night time. As there is no restriction to enter, everyone has a free run of this historic place. Many a times children are known to climb this 70 feet high structure without the knowledge of their parents and luckily no untoward incident has been reported so far.

Like many other structures in this river island, no one knows under whom this historical place comes under. Many local residents have knocked on the doors of Town Municipal Council (TMC) but realise that it does not come under the TMC jurisdiction.

Clean Bateri at least once a year: This unique watch tower-cum-flag post structure should at least be cleaned once every year, said Taluk Karnataka Rakshana Vedike President Chandagalu Shankar.

It is common to see people all over the country celebrate Independence Day by hoisting the National Flag, but Bateri with its unique history of hoisting flags has a special significance and to hoist the National Flag here is very meaningful. It should also be noted that many great leaders of the past have hoisted the flags here. However, it is sad to see that our Government is neglecting this historical place and not bothering to preserve it for posterity. If the work on preserving Bateri does not start, then, a district-wide agitation will be launched, warned Chandagalu Shankar.

Does not belong to TMC: Many people think that Bateri comes under TMC, which is wrong. It does not come under our jurisdiction. It is our responsibility to clean Bateri during national festivals and this, the TMC has been doing from the past and in future also we will continue to do it, said TMC Chief Officer Krishna speaking to Star of Mysore.

Bateri should be given to TMC: Bateri should come under TMC limits. The structure is very weak now. This goes to show that both the Taluk and District Administrations have totally neglected it. As we are also an arm of the Government, we do not like to protest against another Government arm. Hence, Bateri should immediately be transferred to TMC, said TMC Member S. Nandeesh.

Since there is no security around the monument, it has become a haven for drunkards and this is creating a problem for not only the neighbouring residents but also to the tourists. The Police Department and other Departments concerned must take steps to prevent such illegal activities from occurring.

This place should be preserved for future generations to make them aware of its rich history. The officials and the people’s representatives who come here every year to hoist the flag with hardly any interest must at least now show interest to develop Bateri, said the locals on the eve of 73rd I-Day.

Bathery (Bateri) is a colloquial word for battery where traditionally a set of cannons were kept to fire at the enemy or at a fort continuously. They were very sturdy structures made to last long because the recoil from the cannons would be very high. Srirangapatna has many such Batheries created by the early  rulers, Tipu Sultan and the British subsequently to breach Tipu Sultan’s fort. The Tipu Sultan Bathery now in Kerala is one such example. There is another famous one near Mangaluru.

The public and the residents should also understand the historical significance of Bateri and preserve the place. The wooden platform of the flag post is broken and this should be repaired but the TMC is not equipped to take up this work. Instead, the Archaeological Survey of India (ASI) must undertake this work.

I have already directed the Tahsildar to immediately clear the weeds and wild growth at Bateri and also asked him to talk with the officials of ASI to take up the restoration work.

Srirangapatna is recognised as a heritage site at the international level and we should preserve the many historical structures in this river town. Hence, I will immediately talk to the Police Department to put a stop to the illegal activities.