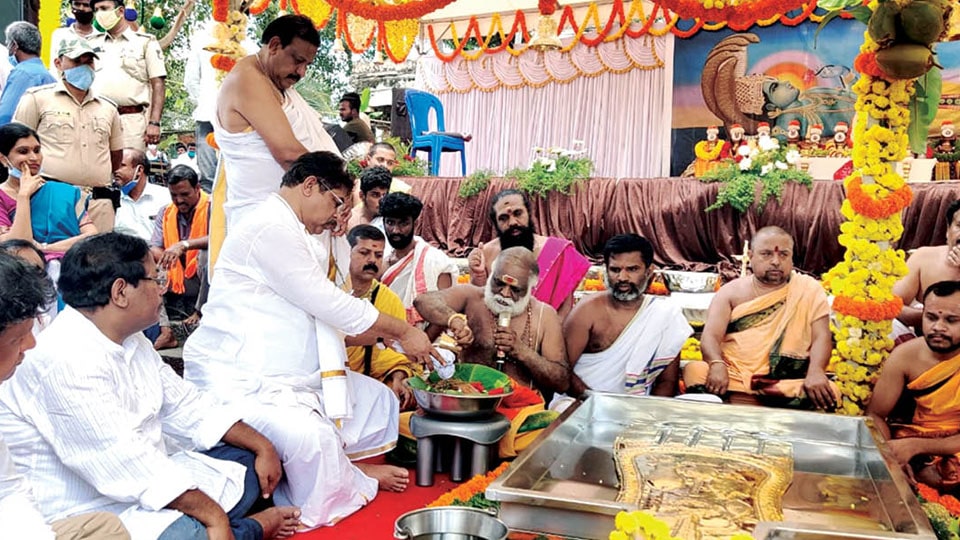 Prays for salvation of departed souls who died of COVID

Srirangapatna: It is a tradition in South India to immerse the ashes of those who have been cremated in River Cauvery. But one of the many sad fallouts of the COVID pandemic is that the ashes of many patients who died of the virus were not claimed by relatives from crematoriums in Bengaluru out of fear and stigma.

After the ashes of nearly 1,250 COVID-19 victims were immersed in River Cauvery near Belakavadi village in Malavalli taluk of Mandya district in June this year, Revenue Minister

R. Ashoka performed the sacred ritual of mass ‘Pinda Pradhana’ at Gosai Ghat near Ganjam on the banks of Cauvery in Srirangapatna this morning.

By performing the rituals as per ancient texts and paying homage to the deceased ancestors, the dead soul attains moksha (salvation). The rituals are significant if performed during the on-going ‘Pitru Paksha’ and Minister Ashoka performed them on behalf of the State Government. Noted Astrologer and Vedic Scholar Dr. Bhanuprakash Sharma and a team of priests performed the rituals that comprised Ganapathi Puja, Punyaha, Panchagavya, Kalasha Puja, Moksha Narayana Bali and Vishnu Pada Puja. After the 10 ‘Pinda Pradhana,’ the rituals of the 11th day including Rudra Parayanam and Dasha Daana were performed.

“The State Government had taken up the responsibility of ensuring dignified farewell to COVID-19 victims whose bodies were not claimed by their family members. As urns were unclaimed, we decided to conduct the last rites. Today I am here for the ‘Pinda Pradhana’ and this gives me immense satisfaction that I have done something good. I have prayed for the salvation of the departed souls,” he said.

The State Government wants to send a message that no one is an orphan in Karnataka and the State is concerned over the deaths. “We are not insensitive and this is our way of showing respect to the departed souls. It is a sacred act. I had not desired to perform such rituals but fate has claimed so my victims and is unfortunate,” he said.

After ‘Pinda Pradhana’, the Minister bathed in Cauvery and performed ‘Pinda Tharpana’ as directed by Dr. Bhanuprakash Sharma. Later, he visited Sri Ranganathaswamy Temple for pujas and only after that the Minister accepted light breakfast and food.