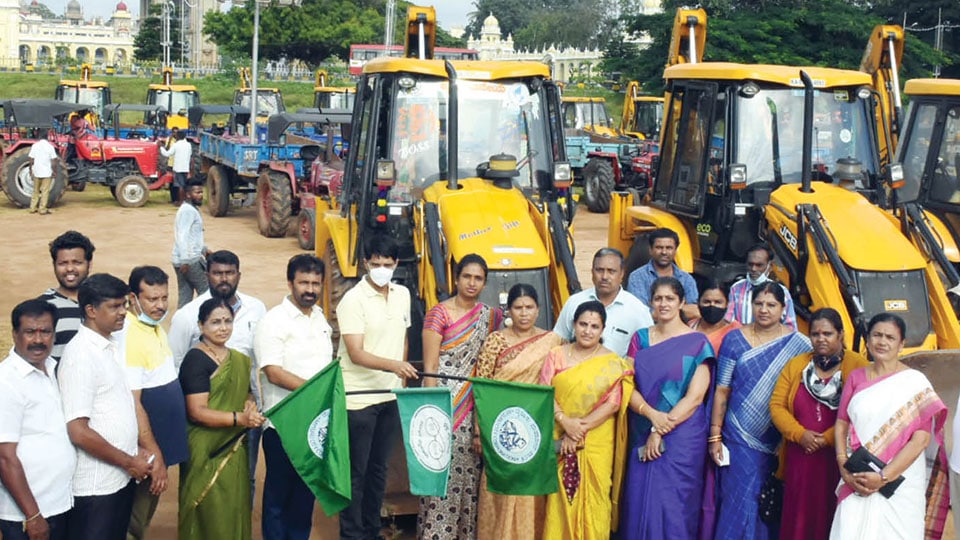 Mysore/Mysuru: With barely three days to go for Nada Habba Dasara-2021, the Mysuru City Corporation (MCC) has started a round-the-clock mass drive to clear solid waste and construction debris in the city. Over 50 backhoes and 50 tractors provided by the contractors

along with MCC’s four backhoes and four tippers will rid the city areas of tonnes of construction debris that have been indiscriminately dumped all over.

The initiative was launched this morning by MLA L. Nagendra and Mayor Sunanda Palanetra at Doddakere Maidan where all the cleaning and debris carrying vehicles were parked.

While the MCC carries out regular cleaning activities and also conducts special cleaning drives ahead of and after Dasara, now the focus will be on clearing construction debris.

This apart, there will be patrol teams who will identify waste dumps and alert the Pourakarmika team in that respective zone and the overall monitoring will be done by the MCC Zonal Health Officers and Assistant Engineers.

The MCC has 2,100 Pourakarmikas on its rolls and apart from them, 160 Pourakarmikas have been hired from outside just for Dasara cleaning purposes. Earlier, due to many events during Dasara, more than 300 Pourakarmikas were additionally hired but this year, there are no major events and as such, the Corporation has hired only 160 external Pourakarmikas who will join the existing group of cleaning personnel, said Dr. Nagaraj.

The focus will be on main roads, Ring Road, residential and commercial areas. All the spots where construction debris have been dumped are identified and workers have been given the location along with details.

Officers, engineers and Zonal Assistant Commissioners from all the nine MCC Zones have been directed to clean all the solid waste from spaces and roads. This will also prevent the outbreak of vector-borne diseases such as dengue in times of pandemic, Dr. Nagaraj said, thanking the MCC contractors for giving their vehicles for the cleaning drive free of cost.

“We will clean the debris and solid waste from vacant plots of land in residential areas after residents complained about unauthorised dumping of waste on private plots. The Corporation teams and private conservancy operators will clear the waste in three days and an action plan has been formed,” he added.