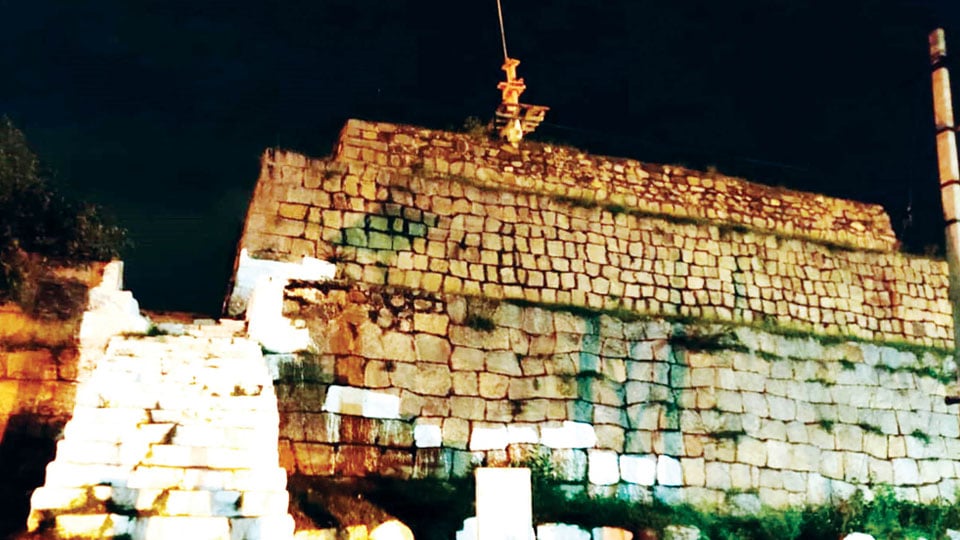 500-year-old Batheri in dark for Dasara

Srirangapatna: While the entire Srirangapatna soaked in lights, cultural programmes, processions and decorations for Dasara, a celebration that is steeped in history, the Batheri remained in the dark as no one even cared to illuminate this structure that has deep roots in history.

For the record, in the previous years, the Batheri was the centre of attraction as all cultural programmes were held here attracting crowds. The entire place is usually illuminated to reflect the yesteryear grandeur and visitors were pulled by its attraction. This year, however, not even a single light was lit here.

Residents, upset with the attitude of officers of the Taluk, said it was unfortunate that the administration ignored the place. “Rajas, Maharajas and Sultans have proudly protected this historical monument where they were hoisting flags from this flagpole in Batheri. The place is in shambles now,” they said, taking umbrage at the official neglect.

This place classified as a heritage structure is very close to the Delhi Gate near the Srirangapatna Fort. This Batheri was built during the reign of Vijayanagar rulers in the 15th Century, when Proudadevaraya (Second Devaraya) was ruling the kingdom. This structure was built to hoist the flag with the Varaha symbol.

This is a place exclusively to hoist the flag with a solid iron pole, a flight of steep steps and a wooden platform held by strong wires. Batheri is built in the form of a square and it is over 100 feet above the ground. In front, an idol of Veeranjaneya is placed. If one stands on the Batheri, one can have a panoramic view of Srirangapatna.

Lakhs of rupees have been spent by the Taluk and District Administrations this time for illumination and all the Government buildings and landmarks have been brightly lit up. But the authorities preferred to ignore the history by not illuminating the Batheri, alleged the residents.