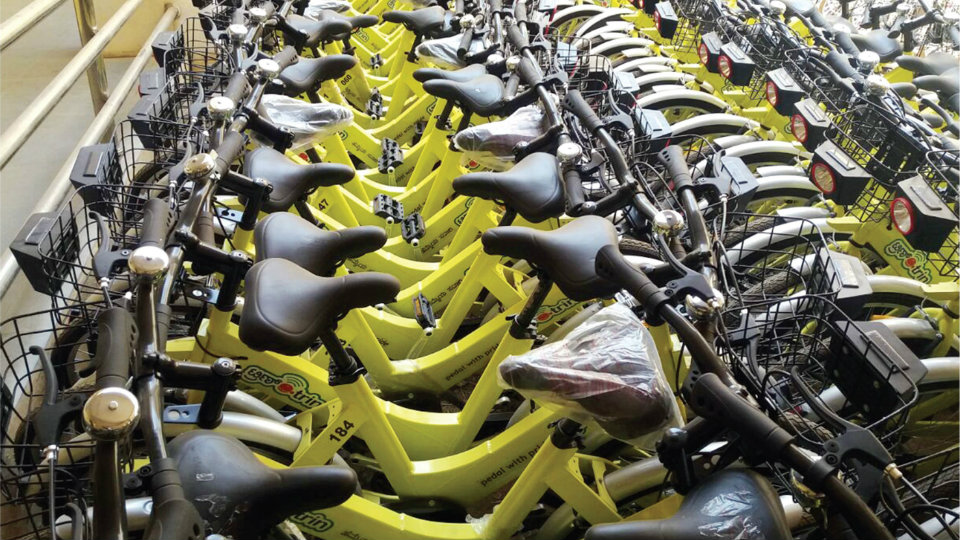 Your wait for ‘Trin Trin’ just got a bit longer !

Enough has been written about ‘Trin Trin’, India’s first Public Bicycle Sharing (PBS) initiative that is scheduled to be implemented in Mysuru. From the last 8 months, there have been enough publicity and Mysureans have been waiting for the scheme to be a reality. Now it looks like the project will be delayed further and the latest roadblock is the location of docking stations.

However, the District Administration has fixed a deadline of March second week for the project to take off and aims to issue smart cards from then.

The project was initiated on July 16, 2016 with much fanfare with District Minister, MLAs and a host of elected representatives cycling near the Balarama Gate of Mysore Palace. At that time, it was announced that the city will get PBS in matter of days.

Interestingly, the smart card to be used for PBS was supposed to be launched on Mar.1 and month-long trial run was completed in Dec. 2016. Trial runs to Chamundi Hill was also organised to popularise the scheme.

Several elected representatives have locked horns with Green Wheel Ride, a Mysuru-based enterprise to whom the operations of the project had been outsourced, over the location of the docking stations. Though over 38 docking stations (there are a total of 52 docking hubs at 48 centres planned) across the city have been created, with CCTV cameras, connectivity and docks, the remaining are yet to be completed. Of them five have run into rough weather over the location.

The ‘Trin Trin’ project is run by the State Government and is being funded by the World Bank under its Global Environment Facility grant. Rs. 20 crore has been earmarked for the project. MCC is implementing the scheme in collaboration with the Directorate of Urban Land Transport (DULT). While the MCC will have ownership of the bicycles used for PBS, the project will be operated by Green Wheel Ride.

The scheme will offer about 430 regular bicycles, which can be used for commute on the city’s flat stretches, while around 20 multispeed cycles will be made available for navigating the steep roads on Chamundi Hill. Five bicycles equipped with an electric motor too will be provided at Hill-top.

Other reasons for the delay include demand for revising fare structure (see box) for borrowing bicycles by elected representatives who feel that the cost is too high. If a person using a bicycle has to pay Rs. 95 for six hours, he can as well use other modes of transport including filling petrol for Rs. 95 to his car or a two-wheeler, they argue.

As per the condition put forward by DULT, a user must register in www.mytrintrin.com or download the ‘MyTrinTrin’ app on their smart phones. Once registered, they will have to procure a smart card at the dedicated ‘Trin Trin’ outlets at the Railway Station, city and sub-urban bus stands, Mysore Palace, Sri Chamarajendra Zoological Gardens, Hardinge Circle and Ballal Circle RTO Office.

“We will distribute smart cards from second week of March for the project. Trial runs have already been completed and I have given a deadline of March second week. If there are any issues in the fare structure they can be discussed at a later stage after the project launch.”