Home » News » 5,500 plates of Chitranna sold out in 25 minutes at Indira Canteens 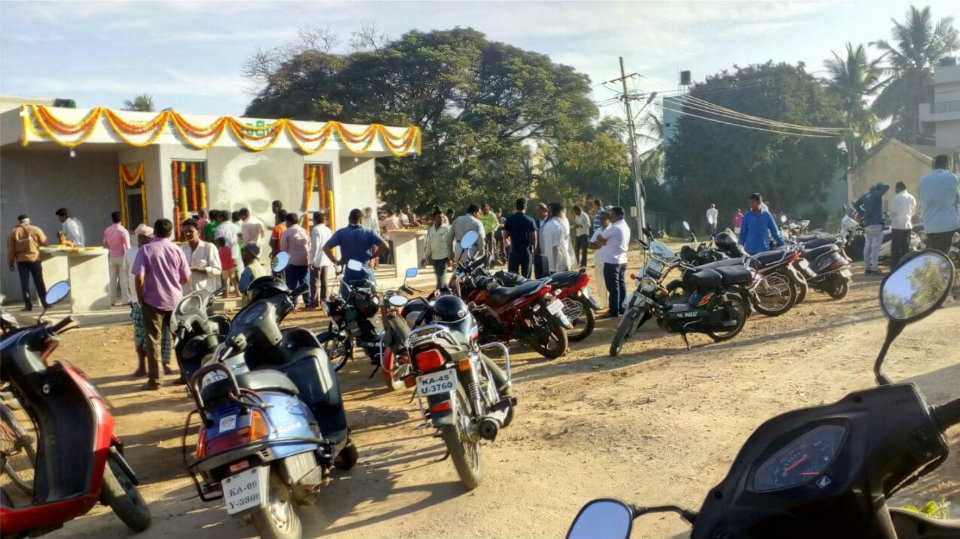 5,500 plates of Chitranna sold out in 25 minutes at Indira Canteens

Mysuru: Over 5,500 plates of Chitranna and Kempu (red) Chutney served at all the 11 Indira Canteens across the city this morning was ‘full-to-full sold out’ with people polishing it off in just 20 to 25 minutes. The canteens were inaugurated by Chief Minister Siddharamaiah yesterday and this morning, the canteens started supplying food to public.

The response to the canteen was beyond expectations with people queuing up before them as early as 6.30 am and as soon as the food counters opened at 7 am, people began relishing the Chitranna along with table-spoon-full scoops of red chutney. Most of the people had two to three plates and some had more than four.

Most of the food was consumed by auto and truck drivers, vegetable vendors, tongawallas and daily wage workers. Each canteen was served with breakfast that could feed 500 people. The breakfast that was supposed to be served till 9 am got over by 7.30 am and people who came to canteens at 7.30 am were seen demanding food.

This led to heated arguments at the CADA Office canteen and at Kumbarakoppal canteen. At CADA office, disappointed customers, who had come to have cheap-and-good breakfast, were seen arguing with the people managing the food counters as the breakfast got over early.

They alleged that food was served only for 50 people while claims were made that 500 people were fed. People questioned, how could 500 people have breakfast in just 20 minutes.

The K.R. Police, who entered the scene, pacified the crowd. Public were also seen arguing at Kumbarakoppal canteen.

Speaking to Star of Mysore, Madhu, who has bagged the contract to supply food, said that they had sent over 5,500 plates of breakfast to all the 11 Indira Canteens (each canteen 500 plates).

“We cannot lessen the quantity and the tokens issued will prove this. Unless there is a direction from the District Administration to increase the food quantity, we have to maintain the count of 500 plates per canteen,” he said.

Madhu said that the automatic token-generating machines will be placed at all canteen counters in city like in Bengaluru that will give an exact figure of how many tokens were sold and how many plates of food were consumed.